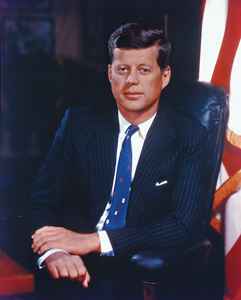 John Fitzgerald Kennedy, often referred to as John F. Kennedy, JFK, or Jack Kennedy, was the 35th President of the United States. He served from 1961 until his assassination in 1963.

A member of the prominent Kennedy political family, he is considered an icon of American liberalism. During World War II, he served as a naval lieutenant in the Pacific theater and was cited for exceptional bravery for the rescue of his men.

Major events during his presidency included the failed Bay of Pigs invasion, the Cuban Missile Crisis, the building of the Berlin Wall, the Space Race, early events of the Vietnam War, and the American Civil Rights Movement.

In rankings of US presidents, historians usually grade him above average, but among the general public he is often regarded as among the greatest presidents.

He is also the only Roman Catholic ever to become President, the first president to serve who was born in the 20th century, the last to die while still in office, the last Democrat from the North to be elected, and the last to be elected while serving in the US Senate.

Rest... In... Peace... by crimsonmetal74
“VH1’s Top 200+ “Pop Icons” Of All Time” by crimsonmetal74
Politicians, government officials and diplomats by borge_jensen
American Politicians by tsivihcra
murdered artists by 8m2stereo
Murdered by TwinPowerForce
Presidents Of The USA @ Discogs by stassen
View More Lists →