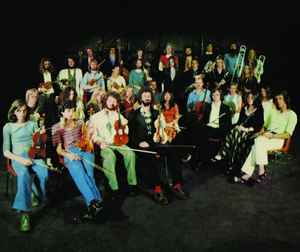 Profile:
The self-proclaimed "world's worst orchestra" was founded by Gavin Bryars in 1970 when he was lecturing at the Portsmouth School of Art.

Bryars wanted to engage the masses with classical music, and sought a way to liberate the form from the pomposity of its audience. His idea was to form an orchestra of the people. Anyone could join, regardless of skill.

The orchestra comprised known musicians playing instruments they had no knowledge of, virtuoso players and people who had never played an instrument in their lives. Their oeuvré would encompass the popular classics and rock songs - music that could be played by ear. No sight-reading skills were therefore required. The virtuoso players kept everything vaguely within the realms of what might be called a tune, with the other players reaching for (and missing) notes nearby. The result was a fascinating atonal mess of a noise, one which was considered profound by several of Bryars classical contemporaries.

The hilarious results of this experiment led to the Portsmouth Sinfonia's records being pitched at the comedy market which earned them a cult following, enough for them to be selling out the Royal Albert Hall by 1974.