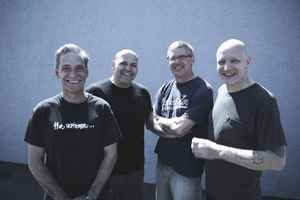 Profile:
Descendents were formed in 1977 as an acoustic duo by Frank Navetta, and David Nolte. Bill Stevenson soon hooked up with the duo as their drummer. At the end of 1977, Nolte became bass player for the The Last and that group took precedent over David's commitment to the Descendents, so he was replaced by Tony Lombardo, although David stuck around briefly to sing with the band. Their first release (as a trio at the time with Navetta and Lombardo handling vocals) was the Ride The Wild / It's A Hectic World 7" in the style of melodic garage pop.
In 1980 they enlisted Milo Aukerman, Stevenson and Navetta's classmate and a constant presence at Descendents' rehearsals, as a singer, and reappeared as a 'proper' punk band, becoming a major player in the hardcore scene developing in Los Angeles at the time.
Their debut album the following year, Milo Goes To College, introduced an element of melody and sensitivity that set them apart from most other hardcore bands and Stevenson's songs in particular were to greatly influence the melodic punk-pop bands of the 1990s with themes of love and loss and alienation (themes far less common in the punk scene at the time).
Following the album's release, Milo actually went to college to embark on an education that would take him as far as a doctorate in biochemistry. The band recruited Ray Cooper (3) to handle the vocals but at the same time Bill Stevenson became the drummer with fellow hardcore punks Black Flag. Although the plan was to play in both bands, Black Flag's rigorous touring scheduled proved to be too time-consuming. During this time, Descendents gigs were sporadic. There were a few gigs where the band appeared as a 5-piece, with both Navetta and Cooper playing guitar and Milo on vocals, and other shows by Lombardo and Cooper playing under the name Ascendents. The band did not record again until 1985, when they returned with the album I Don't Want To Grow Up. This was much more sensitive than "Milo...," despite silly songs such as "Pervert" and "No F.B".
The band's lineup changed around the time "I Don't Want to Grow Up". By the time of the recording, Navetta left the band to become a fisherman in Oregon and guitar duties were handled by Ray Cooper. Tony Lombardo left after the recording as touring was incompatible with his career as a postal carrier. Doug Carrion replaced Lombardo on bass. Lombardo has since stated that leaving the Descendents is the biggest regret he has in life.
Their next album, Enjoy! (released in 1986) was not well received by critics, but fans liked it. It was a mix of more 'silly' songs (The last track on the album involving band members farting into microphones and laughing).
After the Enjoy! tour, Ray Cooper got a job working in the emerging software scene and Doug Carrion left for other projects, eventually ending up in Dag Nasty. Stevenson invited Stephen Egerton and Karl Alvarez of Salt Lake City's Massacre Guys to replace them, and the now permanent line-up of the Descendents was in place.
The group released the album All in 1987, which, despite "Van", "ALL-O-Gistics" and the one-second "ALL", was the Descendents' most mature 1980's album, and featured emotional songs such as "Coolidge", "Cameage" and "Clean Sheets".
With the release of ALL, the Descendents introduced to the world the driving concept behind their career's work, from which the album derives its title, the philosophy of ALL which they define quite conventionally as "the total extent." The idea of ALL as a concept beyond this conventional definition is one of endless self improvement. "The total extent" is an all-encompassing greatness, the pursuit of which is endless and impossible, but which is also the source of all real happiness.
Milo left again in 1987 and the remaining Descendents reformed with singer Dave Smalley and reformed under the name ALL and continued the legacy until 1996, when the Descendents reformed again with Milo Aukerman, now a full-time research biochemist, to record and tour in support of the album Everything Sucks.
In 2004 the band released the 'Merican EP and their newest full length Cool To Be You, which is among their more emotional releases to date. Since then, the Descendents have sporadically performed live and have continued to work on new material when their schedules allow it. In 2002 and 2006, Stevenson, Lombardo, and Navetta got together to record the original songs the Desendents had written (predating "Milo Goes To College") and had never been recorded before (these recording were released as "9th & Walnut", a reference to the location of their old practice space, in the summer of 2021). Navetta passed away in 2008 after a brief illness. In 2014, the band performed the entire "Milo Goes To College" album live with Tony Lombardo playing bass. Also, a documentary about the band, titled "Filmage" was released that same year.
Sites:
Facebook, instagram.com, descendents.tumblr.com, Twitter, Bandcamp, Wikipedia
Members:
Bill Stevenson, David Nolte, Doug Carrion, Frank Navetta, Karl Alvarez, Milo Aukerman, Ray Cooper (3), Stephen Egerton, Tony Lombardo
Variations:
Viewing All | Descendents
Decendents, Descendants, Descendent, The Descendents