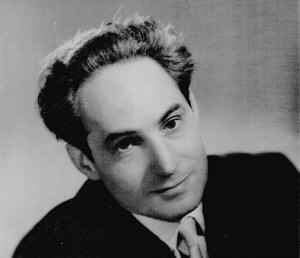 Roger Roger was born on 5 August 1911 at Rouen, in France, and to satisfy a personal whim his father, Edmond Roger, really give him the first name Roger. His mother was an opera singer and his father was a well-known operatic conductor, who had been a classmate of Claude Debussy at the Paris Conservatoire, Roger has received musical education at an early age. His main instrument was the piano, but harmony and counterpoint also played an important role in his education. His first job on leaving school was teaching light opera at the Rouen Arts Theatre.
Roger Roger made his professional conducting debut at the age of eighteen in a Music Hall, but it wasn't long before radio and films beckoned. During his long career he claimed to have been involved in more than 500 film productions.
He started writing for French films towards at the end of the 30s. Firstly documentaries, then feature films. Several European radio stations employed him, especially Radio Luxembourg, Radio 37 and Europe 1; he was closely involved with the early programmes on the new French Television service.
Usually he recorded his own music in Paris. He was also required to create pieces of a more serious nature, including some heavy, repetitive tracks that could be used as accompaniment for industrial scenes in documentaries.
The Paris office of Chappells used to issue its own series of library LPs of background music, and from the mid 50s onwards Roger recorded almost 20 albums of his own compositions for them. He worked most of his life with his childhood friend, Nino Nardini. His widow, the opera singer Eva Rehfuss, remembers that Chappells agent in the USA was particularly successful in getting Roger's music used in various soap operas.
In the mid-60's, he created his own studio: Studio Ganaro.
Roger's own compositions have, at times, been compared with the American Leroy Anderson, although they never actually met. But a close collaboration, which developed into a strong friendship, grew up between Roger and Frank Chacksfield. The two worked together on BBC shows, and in a series called "Performance" for French radio. By a strange coincidence, Frank died just three days before Roger in 1995. Roger also knew Lalo Schifrin well, but it was more of a friendship than a working relationship, because they each preferred to compose on their own.
Roger Roger died in Paris on 12 June 1995 aged 83.
Sites:
rogerroger.fr, Wikipedia
Aliases:
Cecil Leuter, Eric Swan, José Milado, Quinto Monreal, Roger De Foy
In Groups:
Ensemble Roger Roger, José Milado Et Son Orchestre Cubain, Quinto Monreal Y Su Orquesta, Roger Roger And His Champs Elysees Orchestra, Roger Roger And His Orchestra, Roger's New Conception, Stringtronics
Variations:
Viewing All | Roger Roger
R Roger, R. Roger, R.Roger, Roger, Roger Roger Et Son Orchestre, Roger Roger's Moog Machine, Roger Rogers, Roger-Roger, Roger/Roger, Roger; Roger, Roger—Roger, П. Роже, Р. Роже

Well, these days, and since years, I do not know any other Music Composer wich makes me feel Physically Good, and I automaticly include Georges Teperino near him like it would be a singular musical personification with a precise discovered output.
I mean Roger was a Musician too and he performed on many of his Libraries and so his musical compositions were made in a way that every bit of Sound Entity is balanced to a high degree of attentive care, so to obtain at the end one totally different unique Overrall Sound.
His creative Skilss were enhanced by his Classical Conductor formation.
This led to the formation of a Craftmanship Master wich blended Orchestral Music and Electronic Music in a sort of total new way of "multi-layer composing".
We can always see what we hear and there's always a changing background behind his enchanting melodies and is really curious to observe this always happening, for example, in one of his early 1956 soundtrack composition and in one of his many Library tracks from the seventies.
We cannot forget him as unique Figure both in Easy Listening and in the emerging early Electronic Music and still we cannot forget that he widely cooperated with his Friend and Alter-Duo Georges Achille Teperino, alias Nino Nardini, with the same strong purpose to deliver the world of some of the most ground-breaking music, wich closed down the "Golden Age era" of Big Band Music and opened the gates for the Modern Electronic Music.

His Music has a big range among Human emotions and his music has a basic ingredient made of fun and "divertissement": his joy of life wich clearly shines in his music has brought many relief smiles to this tough life and in gloomy moments the listeners soul is lifted from his heavy thoughts.
Life wouldn't be the same with such a comic and funny music, and plus, THIS Music does not exist elsewhere at present time.

Roger is good for your Health !