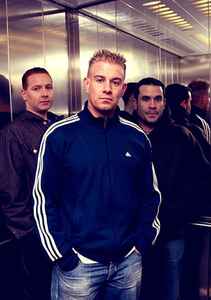 From Ayr, Scotland, UK. "Operation Blade" entered the UK national charts at Number Five and sold upwards of 250,000 copies with Platinum for sales in Australia.

Public Domain changed their line up in 2002 when Mallorca Lee and David Forbes continued with their solo projects.
Public Domain originally were James Allan, Mark Sherry and Alistair MacIsaac, that penned the hit "Operation Blade". After signing the track to Slinky it was decided they needed a frontman - enter Mallorca Lee with David Forbes; and both Mallorca and David contributed to the album "Hardhop Superstars".
After touring the album worldwide in 2001/2003, Mallorca and David continued with their solo projects, and in 2004 Alistair MacIsaac also left the band to concentrate on other projects. Enter Neil Skinner (MC Cyclone), a lifelong friend of all the guys and well-known for his skills with Dyewitness.

In 2009 Mark Sherry moved on to concentrate on his Solo projects.

July 6, 2015
Quite possibly the biggest sell out ever, in a genre of music that is cheap, running around on stage pretending to be an MC to a Public Enemy sample whilst turning a decent hip hop act into sheer shit. This is production line, gimmick, one-trick, rubbish. If I was to describe this act and their music in one word, it would be..... anus.

Public Domain have really pushed the barriers in the Tech Trance genre, after beginning with the ever popular Operation Blade (Bass In The Place London). They have moved away from the more commercial orientated music into a more driving, underground sound. Their Central Energy - Public Domain vs. Warp Brothers mix showcases this, showing that they can DJ as well.