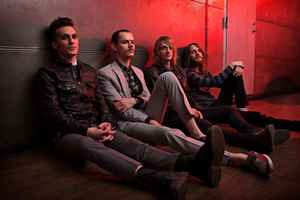 Since 2004 The Blue Van has been touring most parts of the world. In between touring – counting not only 200+ shows in US - but also numerous concerts in Europe and Japan, they've had time to put out 4 critically acclaimed albums - The full throttle mod’ster album "The Art Of Rolling" (2005), the more organic west coast manifesto "Dear Independence" 2007), the more symphonic guitar-driven album “Man Up”(2008) and the new “Love Shot” (2010). 5th. full length "Would You Change Your Life?" will be released fall 2012.

The Blue Van have shared the stage with Jet, Franz Ferdinand, The Killers, Keane, Razorlight, Hot Hot Heat, The Pretenders, Electric Six and many others.

They have received two BMI Awards for the theme song “Dear Independence” featured in the US TV series “Royal Pains”.

A band determined to amaze on record and live – now with more energy than ever. As for the Live show, The Blue Van goes for the kill... every time.
Sites:
thebluevan.com
Aliases:
The Van (2)
Members:
Allan F. Villadsen, Per M. Jørgensen, Søren V. Christensen, Steffen Westmark
Variations:
Viewing All | The Blue Van
Blue Van, TBV