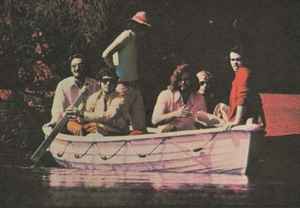 Profile:
Psychedelic and Prog Rock band from Peru.
Traffic Sound was a Peruvian rock band founded in 1967 by Manuel Sanguinetti (vocals), Freddy Rizo Patrón (rhythm guitar), Jean Pierre Magnet (sax), Willy Barclay (Willy "Wilito" Barclay) (lead guitar), Willy Thorne (bass) and Luis Nevares (Luis "Lucho" Nevares) (drums). Freddy and Manuel had met in school and played in Los Hang Ten's. Freddy and his older brother Jose originally thought of founding "Traffic Sound".
The name was chosen because of their penchant for a traffic light, placed as a souvenir in the attic of the Rizo-Patróns house, where they held their practices, after a wild night in Lima.
After a year of continued rehearsals and private shows they tried their luck at Peruvian psychedelic emporium The Tiffany with great success and recorded his first album "A Bailar Go Go" in 1968 with label MAG. It contained versions of songs by The Doors, Cream, Jimi Hendrix, Iron Butterfly and The Animals. In later albums they included their own music with a fusion of Andean and Afro-Latin sounds. They held gigs in Peru, Chile, Argentina and Brazil.
Their second album "Virgin" (1969), all original material, catapulted them to legendary status especially because it contains the absolute icon of Peruvian Psychedelia, "Meshkalina".
In 1970 they recorded another LP named "Traffic Sound", aka. III, aka. "Tibet's Suzettes", where they blend the Psychedelic spirit with an Andean folk sound, and give the necessary step to be closer than ever to progressive rock.
In 1971 Braniff International Airways organized the first South American Tour of a Peruvian band, and Traffic Sound was well received in demanding markets such as Argentina and Brazil.
After the tour they switched to bigger label Sono Radio and released four singles. At this point Willy Thorne left the band and was replaced by Zulu (7) or (Miguel Angel Ruiz Orbegoso) on bass, with whom they recorded their last LP, "Lux". Incredibly, during a massive strike of Sono Radio workers the master tapes disappeared and were only found in 1996. This album is different to the previous, the Andean influence is more evident and some political concerns were expressed.
The band held a memorable concert at the Teatro Segura in Lima together with the Contemporary Orchestra of Peruvian jazz pianist Jaime Delgado Aparicio in 1971 and disbanded in 1972.
Sites:
incarock.com
Members:
Freddy Rizo Patrón, Jean Pierre Magnet, Luis Nevares, Manuel Sanguinetti, Miguel Ángel Ruiz, Willy Barclay, Willy Thorne, Zulu (7)
Variations:
Viewing All | Traffic Sound
Conjunto The Traffic Sound, The Traffic Sound, Traffie Sound

January 27, 2022
Awesome group, perhaps the best peruvian group of all time. For anyone interested in checking everything they've released, there's one live album available in streaming services, "Clap at the Jap" with some great performances. I think it was recorded some time in the 2010s.