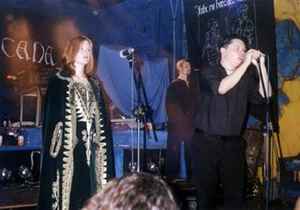 Profile:
Swedish medieval-ambient/neoclassical band founded in 1994 and led by Peter Bjärgö. Debut album is 1996 "Dark Age Of Reason" on Cold Meat Industry. They are now releasing their works through Cyclic Law.

January 14, 2018
Whoa... hold on people, why so serious? Loosen your glutes as they say in my country. You seem like members of an Arcana-cult or fanboys. Yes, maybe "insolent copycat" wasn't a fortunate expression, maybe "inspired by" or just "continuator" would have been better, but association with more sacred and dark early DCD from 80s is just too obvious, can't help. But still, I like the band, it's equally quality music.

December 1, 2017
.303. really? You hear one neo-classical artist and you've heard 'em all huh? Chances are Peter Bjärgö was inspired by and influenced by some of the more dense and sombre Dead Can Dance tracks. So, what, fuxk him because his art didn't come out of a vacuum? If it was in fact listening to DCD that inspired his style, then he distilled and refined and condensed a certain mood that was only occasionally entertained by DCD. But it is just as likely that it was cinema soundtracks, obscure opera, even that stupid Midnight Syndicate project that sold Cd's out of Hot Topic could have inspired him to do "that...but better". Who cares? Arcana's music only echoes of ONE expression of "mood" invoked from the vast host of them commanded by Dead Can Dance.

The real problem with your insolent comment is that it disparages both groups of artists. It trivialises the staggering expanse of stylistic diversity that DCD masterfully orchestrates and fails to validate the ponderous depths of mood distinguishing the immersive soundscapes conjured by Bjärgö.

Whatever kindled the fire in Bjärgö to compose the music he does has no claims on the distinct aural sorcery of Arcana.