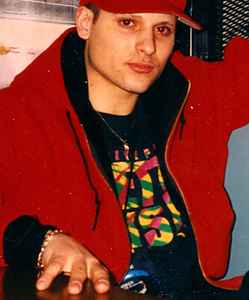 Real Name:
Joseph Paul Longo III
Profile:
Pal Joey (aka Joseph Longo) came up in the heady days of New York street culture, amidst B-boying, boom boxes and an unusually entrepreneurial spirit of beat-making. Beginning with crude "pause tapes," he was soon making tracks with drum machines and sampled vocals, all painstakingly assembled with razors and reel-to-reel. Working at Vinylmania, where Larry Levan might be found shopping for records in his pajamas, helped Joey's entrance into the city's nascent house music scene, and he was soon working with everyone from KRS-One to Sade to the Orb, whose "Little Fluffy Clouds" he tweaked for stateside tastes. True to his city's inclusive spirit, Pal Joey consistently blurs the lines between disco, house and hip-hop, dropping scraps of old soul and recent rap alike over his skipping drum patterns and head-nodding keyboard lines. Joey's records (under his principal moniker and also aliases like Earth People and Soho) have appeared on Jive, Epic, Talkin' Loud, Wave and Coco Machete.
He also has run three labels of his own - Loop D'Loop, Cabaret and Footstompin' Records

Pal Joey is a top dollar legend in NYC music production. I've loved his own Remix of 'Little Fluffy Clouds' for many many years since my youth. His more recent work with Chicago's Robert Owens 'Between the Lines' and all of his E.P.s as French Touch on Ornaments are special hot vinyl products in their own right.

May 2, 2020
Pal Joey has my attention for sure. He has the flow and raw sound im a lookin for.
Reply Notify me 2 Helpful


A true original ! Pal Joey apparently has no difficulty in being - and sounding - different.

In many ways PJ reminds me of Erik Satie, an eccentric, dadaist, creative and talented mind who regularly produces the most charming, playful, luminous, experimental pieces in House Music.

Check "Pulling a Cat Out of a Hat" and "Keeping On" on LDP17 for instance, or "Show me" with its delicious clarinet on LDP18. A.P.Sutter's "You don't know" reconstruction on Hipbone Records is also a striking example.

An young urban poet is born, and that's relaxing thinking people like that still go on doing their thing.

June 10, 2003
There is no way that Pal Joey is the vocalist on White Noise's "Electrical Storm In Hell". First of all, Pal Joey's real name is Joseph Longo, not Joey Whitman. Secondly, according to allmusic.com, the vocalist for White Noise is JOHN Whitman, not Joey Whitman. Third, White Noise are from England, Pal Joey is from NYC. Fourth, the White Noise record came out in 1969, and according to press clippings on Pal Joeys own website, he was 27 in the late 80s/early 90s, which would have made him approximately 5 years old in 1969.
Reply Notify me 14 Helpful

February 9, 2003
Pal Joey was also the singer on 'An Electric Storm In Hell' by WHITE NOISE ( under his real name Joe Whitman). It's good to have people like him around , who keep influencing the music scene with their individuality and non conformistic attitude.
Reply  See 1 reply Notify me 1 Helpful