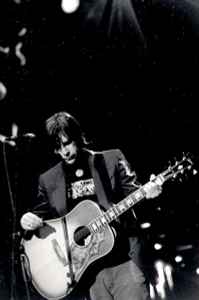 He signed to Almo Sounds, a subsidiary of A&M Records, and released two albums on the label, 1996's Gus and 1999's Word of Mouth Parade. The label disbanded in 2000. Since then, Black has released 3 albums, all of which were released internationally before seeing domestic distribution. His album "Autumn Days" was selected by iTunes as Top 10 "Best Indie Singer/Songwriter" releases of 2006. The 2008 release "Today Is Not The Day..." was critically acclaimed in Europe.

He produced a hit cover of the popular Blue Öyster Cult song "Don't Fear the Reaper" for the Scream soundtrack. The same cover was also featured at the end of the 19th episode of season 2 of Smallville, and in the horror film The Howling: Reborn. His cover of "Paranoid" appeared on the Absinthe Makes the Heart Grow Fonder episode of the TV show Californication. His work has been featured in several other TV shows as well, including: Alias, Brothers and Sisters, One Tree Hill, and Grey's Anatomy.
Sites:
MySpace, gusmusic.com, Wikipedia, ascap.com
Aliases:
Anthony J. Penaloza, Gus Penaloza
In Groups:
The Tinseltown Tabernacle Choir
Variations:
Viewing All | Gus Black
G. Black, GB, Gus