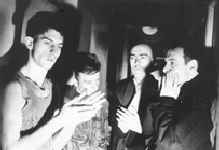 Profile:
The Sheffield based band Hula was founded in 1981. Three members (Mark Albrow, Alan Fish and Ron Wright) lived with Stephen Mallinder (Cabaret Voltaire) and Paul Widger (They must be Russians, Clock DVA, the Box) in a villa called Hula Kula. After trying the bass players Alan Watt, the notorious Chris Brain (Tense, NOS) and Mark Brydon (Chakk, Moloko), and after the replacement of Alan Fish by Nort (both drummed for the Cabs), Hula recorded the impressive album Murmur. Ingredients like cut ups, steady rhythms, and paranoia vocals were blended together into a unique white funky sound.
Hula recruited John Avery as a bass player. A bass player was necessary for the exciting live shows with lots of video material (Peter Care). Hula continued to bring out danceable 12 inches and more experimental albums. With this line-up Hula was more or less successful. International tours were made. Radio sessions for VPRO and John Peel were recorded and broadcasted. Being a support act for Depeche Mode implied performing live in Wembley Arena for huge crowds.

After Nort left the band in 1986 the music changed, but still remained interesting. Later on Mark Albrow quit as well. When their record company Red Rhino went bankrupt they moved on to Wax Trax. They released the last Hula record: a Jimi Hendrix cover of Voodoo Chile. The 12 inch did not sort out the desired effect. Jo Cammack joined in officially and they made new songs in 1991. Intimates say it is the best Hula ever made. For the public it is hard to judge, for the material is still in the vaults of the studio. Eventually Hula broke up.
[Cut and pasted from www.soureden.com]
Sites:
Facebook, desirerecords.com, andrewdarlington.blogspot.com
Members:
Alan Fisch, Jo Cammack, John Avery, Mark Albrow, Mark Brydon, Nort, Ron Wright

August 22, 2014
BenedenNAP, the dutch weekly radioshow on the edge of dance floor and chill out, just released a Hula special on mix cloud: http://www.mixcloud.com/benedenNAP/098-beneden-nap-22-augustus-2014-hula-special/
Great overview of their music.

Dear God. Please let a good label buy the rights for the releases of Hula, remaster them and rerelease them on CD. These early compatriotes of Cabaret Voltaire deserve more (just like Chakk). Yeah, you can allready buy the remastered mp3s/wavs from some very well known online shops but a cd, a booklet with old photos and a nice small biography (see the LTM reissues of the 23 Skidoo backcatalog) would do Hula a favour. Fans of Cabaret Voltaire, Fad Gadget, Portion Control, Tones On Tail, Front 242, Skinny Puppy take a note!
Sheffield: the birth place of forward thinking modern music. Do I need to say more?