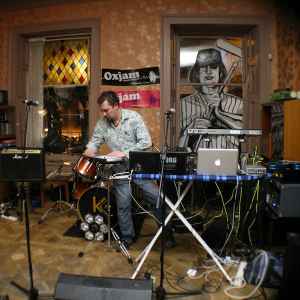 Real Name:
Shaun Dowse
Profile:
Voltergeist began releasing his own blend of acidic dub techno music with the debut release of "Earthen Spirit Loops" on his own label Microrave Records in 2008, but has been recording his own music under various monikers since 1993.

Starting out after receiving ProTracker sample sequencing software on the coverdisk of Amiga Format magazine in 1993, he created music under the name Creations Of The Mind, releasing public domain diskettes with his music files.

After receiving a Yamaha RY30 drum machine as a Christmas gift at the age of 17, he began recording music as Listmaker, manually synchronizing the hardware to the non-MIDI enabled software. Performing his tracks live at student unions around Glasgow, he built up a reputation as being a dependable act who would play at any party, any time!

He spent his time (wages and student loans) building up a collection of hardware synthesizers, sequencing the equipment using his trusty Amiga 1200 which by this time was running Bars & Pipes MIDI software. Live sets were becoming more and more complicated, so he would play alongside fellow Ayrshire electronic musician Galaxis Quench. The two would help each other perform tracks from a combined repertoire, using masses of electronic gadgets and playing for hours at a time. Eventually, after years of too many parties and the accompanying lifestyle, they took an extended break from music!

He spent a short time as Mr Dimensional; the cloak-wearing MS10-playing frontperson of Glaswegian wacky psychedelic fringe-folk band The Pendulums in 2004 before forming synth-duo Emotiquon with James "Mr Mechanoid" Rehill.

In 2008, Emotiquon were invited to support the band Grand National onstage at the Altitude Comedy Festival in Meribel, where they decided to start up their own label Microrave Records to release "Grand National - Cut By The Brakes: Remixed", after purchasing a license from Rob Da Bank's label Sunday Best.

Voltergeist is busy working on some exciting new material which he hopes to release in 2014. He is currently releasing archive recordings from his previous monikers on his Flyin' Saucepan DIY label, where each monthly archive release is bundled with bonus digital content and it's own unique recipe!
Sites:
voltergeist.com, Facebook, SoundCloud, Last.fm
Aliases:
Listmaker, Shaun Dowse