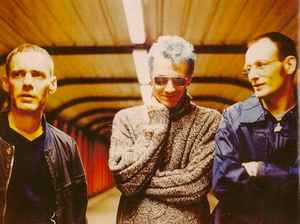 Profile:
Formed in the late 1980's by three friends living together in London, Fluke started out making dreamy pop before the explosion of acid house influenced them. It was the growing electronica sound that influenced their early singles (Thumper, Joni, Slid) and their techno-rock debut album The Techno Rose Of Blighty. They signed with Virgin for their next albums Six Wheels On My Wagon (1993) and OTO (1995), which proved Fluke to be a driving force in the progressive house and trip-hop scenes. Their fourth album Risotto was a runaway success in 1997 and 1998, powered by the cartoony big-beat of "Atom Bomb" and the gentle breakbeat track "Reeferendrum". After enjoying worldwide touring for several years, Fluke took time off to expand their already-massive remixography, releasing the retrospective Progressive History X in 2001. Their final and most mature album, Puppy, followed in mid-2003, this time incorporating Jon Fugler and Mike Bryant only, while Mike Tournier concentrated on his own band Syntax (4) together with vocalist Jan Burton.

November 25, 2020
Groovy Feeling was one of the seminal tracks of the 90's, got hammered everywhere. Hauntology is right they never got the acclaim they deserved.

November 4, 2019
Fluke were/are one of my all-time favourite collectives.
It's a crying shame that they didn't receive the critical acclaim and recognition that many of their contemporaries [at the time] went on to achieve.
They were shockingly underrated yet so damn influential.
I often wish that they were still together producing quality electronic music [as Fluke] but I'm extremely thankful that they left such a stellar legacy behind them for everyone to enjoy.
Thanks, guys.
See 1 reply