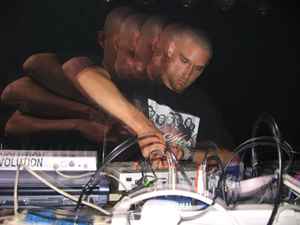 Al: You have been doing this Hardcore thing for some time now, how did it all start?
Matt Green: I have to give massive respect to Traffik for this, one of those perfect old school answers to this question. In 93/94 I was well into pirate station Energy FM as it was prominant in the Croydon area. Was looking for Jungle and instead heard this nasty punk shit coming out, was hooked. The idea that we played together and made tunes together later on is one of those precious moments :D Have to give Public Enemy respect too, their style influenced me massively.

Al: Apart from The Hardcore in recent years you also started to produce and release Dubstep, have you found your material well recieved? Also is their a style you prefer and what other Dubstep artists / labels would you recommend to a Hardcore Head?
Matt Green: Its an odd one with Dubstep, the style I originally liked almost doesnt exist anymore, crazy how the scene exploded and to be honest, became so gheigh at times. Love deep, depressing down tempo shit to balance out the Core shit, dont connect the two and maybe this is a problem. First 3 in 2007 went down very well, hard to keep up with a changing scene other than just doing what you feel.

Al: You ran your famous Corrupt Records label from 1998 to 2007 and featured the likes of Traffik, Deathmachine, Drokz and Fracture 4 but the label ceased and you started two new label projects. Can you tell us all about these and why the change?
Matt Green: Yeah, I was getting a stupid amount of demos ranging from Doom to Splitter, didnt suit my personal style. Also from 2004 I took the tempo down (which was bad timing for me cos that was Europe kind of accepted breaks), I like to hear the tail of kickdrums, power shit!

Al: When not busy producing, playing live and doing music stuff how do you relax?
Matt Green: I love my films, nerdy sample spotters will have probably clocked that. Like travelling and one of the best things about what I do is going places for free and more to the point, being welcomed by the natives and given a very untouristic experience.

Al: In the last few months you relocated from the UK to live in, Poland, how are you enjoying living there now? Also can you tell us where why the move?
Matt Green: Yeah, I moved around a bit in the last 10 years, Italy, Vienna and now Warsaw. I love Poland and most people dont know jack shit about the place. Just like to experience different places and London wasnt cutting it for me with its fucking rent and bullshit. Cant deny the music and creativity that comes out of UK, we certainly originate a fair bit. Thankfully flights and shit are easy and cheap enough from PL and it doesnt make any real difference in terms of travel times.

Al: I have had the pleasure of seeing you play live many times, and you always rock the place, your also a skilled Dj. Lately you have been mainly doing Dj sets, do you prefer these or is there another reason?
Matt Green: The laptop thing really started to bug me for multiple reasons, one being that my back hurt after cos always lower than decks. Others being, the excess baggage thing in the past, power convertors for EU and of course the fact that you are flying around with a sensitive piece of equipment. I love the flexibility of DJing and nothing has changed as I still play my own shit. Not crazy about the nerdy staring into the screen pics of me over the years lol.

Al: You have played some pretty big gigs over the years such as Dominator, Defqon, Mysteryland, Ground Zero to name some of the festivals. Do you prefer the bigger events or small ones? Also which countries do you enjoy playing in the most?
Matt Green: I love Belgium for the down to earth way they do things but of course NL has its massive gigs that just cant be fucked with. I like hitting new countries and seeing new generations being exposed to the music, they have the freshness and energy like in late 80s/early 90s. UK of course is always mad and it is so cool to have people who actually understand the humour in my music.

Al: Who are some of your favourite artists? In terms of producers, live artists, Djs and general influences on your own music?
Matt Green: Well, obviously artists that have been on Corrupt are the first choices. There are some people out there who ignite my interest but it seems in some genres people come and go quickly. I still love 90s Hardcore, from the faster DOA/Nasenbluten shit to the French dark, moody shit! Would be VERY happy if certain styles made a comeback… although Frenchcore still does exist… in some form.

Al: In terms of music and new releases what else can we expect in 2012 from Matt Green?
Matt Green: Just more mate, got a fucking notebook full of things to sample, shit to do and tunes to make. More collabs with dudes and steady progression forward. Am feeling the noisy, nasty punky shit at the mo.

Al: Anything else you’d like to add?
Matt Green: Yeah, with the world changing at a fucking rapid rate and music becoming something that simply doesnt exist in physical form, the general public have to remember that it isnt about money but if they simply just download everything illegally then at some point all these artists that they love and big up so much are gonna suffer. Not being a greedy prick cos there is fuck all money in Core compared to other scenes but the way some people act on the net sometimes….. Saying that though, also some seriously passionate people out there, dedication is their thing, cheers for the support!