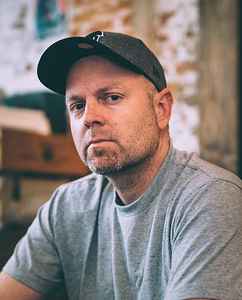 Real Name:
Joshua Paul Davis
Profile:
Joshua Paul Davis (born June 29, 1972 in San Jose, California), better known by his stage name DJ Shadow, is an American record producer and DJ. He first gained notice with the release of his acclaimed debut studio album, Endtroducing...... He has a personal record collection of over 60,000 records.

DJ Shadow is widely credited as a key figure in developing the experimental instrumental hip-hop style associated with the London-based Mo Wax label. Inspired by hip-hop’s early years, he then grew to absorb the heyday of crews like Eric B. & Rakim, Ultramagnetic MCs, and Public Enemy; groups which prominently featured DJs in their ranks.

Josh “Shadow” Davis had already been experimenting with making beats and breaks on a four-track recorder while he was in high school in the Nor-Cal college town of Davis, but it was during university that he co-founded his own Solesides label as an outlet for his original tracks. Hooking up with Davis’ few b-boys (including eventual Solesides artists Blackalicious and Lyrics Born) through the college radio station, Shadow began releasing the Hip-Hop Reconstruction mix tapes in 1991, eventually catching the attention of The Source magazine and Dave Funkenklein. Shadow was featured in the magazine’s “Unsigned Hype” column in 1991, and Klein signed him to a production deal with Hollywood BASIC records. Concurrently, Shadow provided beats and scratches for Bay Area rapper Paris and was featured on his second album. In 1993, Shadow pressed his 17-minute beat-head symphony “Entropy.” His tracks spread widely through the DJ-strong hip-hop underground, eventually reaching James Lavelle of Mo Wax.

Shadow’s first full-length, “Endtroducing…”, was released on the label in late 1996 to immense critical acclaim in Britain and America. “Preemptive Strike,” a compilation of early singles, followed in early 1998. Later that year, Shadow produced tracks for the debut album by U.N.K.L.E., a long-time Mo’ Wax production team that gained superstar guests including Thom Yorke (of Radiohead), Richard Ashcroft (of the Verve), Mike D (of the Beastie Boys), and others.

His next project came in 1999, with the transformation of Solesides into a new label, Quannum Projects. Nearly six years after his debut production album, the proper follow-up, “The Private Press,” was released in June 2002. The following year Shadow released a mix album, “Diminishing Returns,” and in 2004 he released a live album and DVD, “Live! In Tune and on Time.” In 2006 he released another long awaited full-length album “The Outsider,” which featured rising Bay Area Hyphy rappers including Keak Da Sneak and E-40. “The Outsider” also featured a single with Q-Tip (of A Tribe Called Quest), which led to Shadow’s first appearance on The Late Show with David Letterman.

Between 2007 and 2009 Shadow released three volumes of “The 4-Track Era Collection,” a series of his earliest recordings. The 4-Track Era project was exclusively available through his web store, ShopDjShadow.com. In the midst of all of these solo projects, DJ Shadow collaborated with fellow hip-hop DJ Cut Chemist. Together they created a series of mixes that fused soul, funk, and rock, in the framework of a cohesive concept involving using only 45 rpm records (7 inches). These mixes include Brainfreeze, Product Placement, and The Hard Sell, which would be debuted at the Hollywood Bowl.

Shadow’s website relaunched in August 2009, enabling him to sell digital downloads direct to his fans through his own autonomous storefront. 2009 also saw the announcement of Shadow’s involvement with DJ Hero, an Activision video game which features Shadow as a playable character within the game. Shadow also contributed several mixes to the game.

2010 and 2011 saw a tour throughout Europe and North America entitled “Live From The Shadowsphere.” Hailed for its visual innovations, the tour was cited by Beatport as one of the top 10 DJ shows of all time, and was capped off by two memorable performances at the Coachella Festival.

In 2011, DJ Shadow released “The Less You Know, The Better,” purportedly his last full-length album to prominently feature samples. 2012 included “Total Breakdown, Hidden Transmissions From The MPC Era (1992-1996),” an archival project; and “Reconstructed: The Best of DJ Shadow,” a greatest hits album.

2012 saw a shift in Shadow’s live persona…at the request of trendsetting LA club night Low End Theory, he returned to playing traditional, contemporary DJ sets, often eschewing his own music for that of peers.

The hard-hitting sets Shadow played coexisted with the rise of trap, juke, and the fledgling beat scene, catching the ear of large-scale EDM icons such as Diplo and Bassnectar, with whom Shadow performed. An incident at a Miami superclub, in which Shadow refused to temper his set to suit management, was captured on video and went viral, prompting a debate about the autonomy of DJs and the music they play. This only seemed to heighten demand for Shadow as 2013 reportedly saw him play over 100 shows.

Also in 2013, Shadow lent a hand to video game franchise Grand Theft Auto V, compiling and arranging elements of the soundtrack. Notable was his return to production, crafting a remix for Machinedrum, (whom Shadow performed with at Fabric in London and Amsterdam) and ‘70s Dutch progressive band Supersister, who Shadow had previously sampled. In 2014, Shadow toured Australia and performed at SXSW for Vice.

According to his Twitter account, Shadow plans to spend time in the studio and continue to perform his contemporary DJ sets. He has indicated that a new, “very different” type of tour is planned for the Fall of 2014.

August 19, 2018
I agree with almost everything Apeman said about DJ Shadow, as he is easily my favourite DJ/Producer, and as a DJ, he has been a mentor of sorts due to how progressive he is when it comes to making music with turntables and an MPC. Though he is in a class of his own, I equate him to J Dilla, in that he revolutionized the way in which DJ’s use sampling as a means to making tracks sound fresh and unique. Endtroducing is the beat example of this and is the Holy Grail of sampling as the entire album is essentially a collage of rare and diverse samples. It is also by far the best album made by a DJ and is one of the best albums made in any genre. If it were released today, it will still receive accolades for being ahead of its time.

What’s even better is the fact that Shadow is an amazing person as well. I had the honour of meeting him prior to a show in Vancouver, and he was humble, polite, extremely interesting, and grateful. In the realm of superstar DJ’s, it’s rare to meet artists who embody these traits, and it made me even more of a dire hard fan than I already was.

If you’re a fan, and have yet to see him live, I’d urge you to do so as his shows are always cutting edge and extremely entertaining. My first DJ Shadow show was seeing him as an opening act for Jeru Tha Damaja In 1997 at a tiny venue in Vancouver. He played Endtroducing on 6 turntables(!) and brought the house down with an absolutely incredible set. I’ve since seen him a total of 9 times as an opener for The Chemical Brothers, The Roots, with Cut Chemist as Co-headliners, and of course as the main attraction. His skills as a DJ are somewhat unrivalled, especially in today’s age of USB, pre-recorded set ‘DJ’s’, and as a DJ who spins strictly vinyl myself, he has much to teach up and coming DJ’s as turntablism is an art that shouldn’t be taken for granted. DJ’s like Kool Herc, Afrika Bambaataa, and Grandmaster Flash are somewhat responsible for the creation of hip hop itself, putting on shows by engaging the crowd, getting a feel for what tracks to play next, and for showcasing a veritable wizardry of techniques and skills, always pushing the boundaries of turntablism. Shadow incorporates the same principles that his forefathers created, which is why he is so revered and respected as a DJ by his fans and fellow DJ’s alike.

Thank god for vinyl, and for artists like DJ Shadow. I’m so grateful that he continues to put out brilliant albums, that he continues to tour, and that he represents the essence of what constitutes a real DJ. He has already attained legendary status in the realm of turntablism and will go down as one of the best to ever rock the wheels of steel. I’m still waiting on an Endtroducing anniversary tour as that album is absolutely genius and sounds so damn good live. Until then, I’ll always be in the audience regardless of what album he’s promoting, and am eternally grateful for what he’s given us in the realm of music and as a DJ.

January 12, 2009
DJ Shadow is just one heck of an amazing artist. He was the one, that helped expand the audience of abstract trippy hip-hop, sampling and turntablism, and just re-wrote it all, and made it better.

His productions are cinematic, creepy and best of all, just pure cool. His album "Endtroducing" has to be one of the greatest albums of all time, plus I also really like his complation album "Preemptive Strike", and his second LP, "The Private Press". One thing to avoid of this, however is his last album "The Outsider", that was a cash-in on the Hyphy trend. while I did agree that Shadow shouldn't just repeat Endtroducing again, and again, I do think he should not have gone for the commerical rap route.

Save the Outsider, anything with Shadow's name on is just pure gold.

I also listened to the Essential mix and I thought it was one of the best mixes ever. You are right though, it isnt made much for dancing.

March 30, 2003
I've just listened to the Essential Mix that he has done for Radio 1 in the UK. It was good but I was expecting more. He played 80 mins of old skool hip hop stuff and then some weird 60s sounding rock which I suppose is what I should have expected but I just felt it was lacking. A good mix but it got a bit monotonous after a while and you definitely couldn't dance around to it. More a mix to chill out to and drink some beer with your buds!