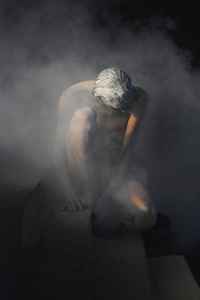 Real Name:
Thomas Kuratli
Profile:
In 2013, after finishing his studies in Zurich‘s Film Academy, director and musician Thomas Kuratli moved from Switzerland to Paris. He first set out on his journey with the intention of writing the screenplay to a movie he had in previously mapped out in his mind, however as time passed, these thoughts were more at home in the musical devices within his grasp. And in a small Parisian basement Pyrit was born.
Desires, questions and anxiety melted together into one musical entity and embodied Thomas’ own musically cosmos. The result was “UFO”, the soundtrack to a nonexistent movie. The album was released in 2015 by Paris based label Bookmaker Records and became a somewhat unexpected small sensation. Pyrit specifically created a setup for his stage shows to control the light and sound of his spherical electronica music, performing in clubs and festivals around Switzerland and France (Bad Bonn Kilbi,
Label Suisse, Transmusicales de Rennes, Antigel Genf, OOAM Festival Baden...).
In 2017, “UFO” has been repressed in a remastered edition by US Label Robotic Empire and Bookmaker Records. With “UFO” Pyrit started a journey that needs to be continued. More complex, elaborated and futuristic, the next station is : “Control”.
Sites:
SoundCloud, Facebook, Bandcamp, bookmakerrecords.com
Aliases:
Thomas Kuratli