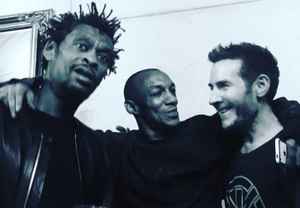 The band currently consists of Robert Del Naja, Tricky, and Daddy G. The original lineup also included Andrew Vowles. The group name is taken from a slogan sprayed by New York graffiti artist 'Brim', who sprayed 'Massive Attack' underneath a 'piece' in Bristol, UK in 1985. 'Brim', along with 'Balogun' and 'Bio' were part of the TATS CRU from NYC who sprayed a 'piece' each together at the Malcolm X Centre, St. Paul's in Bristol. Robert Del Naja, who was an upcoming graffiti artist at the time, with the tag 3-D, has stated that he/they had adopted the slogan initially as a name for a record label, and then later took it on as a band name. During the 1991 Gulf War the group name was shown on some releases as 'Massive' in order to maintain airplay after pressure from the British Government on radio programmers.
Sites:
massiveattack.co.uk, Facebook, instagram.com, SoundCloud, Twitter, vimeo.com, Wikipedia, YouTube
Members:
Adrian Thaws, Andrew Vowles, Grant Marshall, Robert Del Naja
Variations:
Viewing All | Massive Attack
Massiv Attack, Massive, Massive Attac, MassiveAttack, The Massive Attack, 強烈衝擊

September 23, 2021
A nod towards their legacy and importance is the appeal across genres, i.e. famed metal acts Sepultura and Dillinger Escape Plan have both covered "Angel" from Mezzanine.
Reply Notify me Helpful

August 31, 2021
The dropping of 'Attack' from their name during the first Gulf War wasn't about album sales but a measure of protest against the war, all wars. If anything MA is well known to be very socially & politically engaged in activism and campaigns.
Reply Notify me 1 Helpful

February 16, 2021
I preferred it when they changed their name to ‘Massive’ during the Gulf War so as not to harm their sales.
Reply Notify me 1 Helpful

November 22, 2017
Can we know why the name of Shara Nelson doesn't appear..anywhere ??
she was part of the original group !
Reply  See 1 reply Notify me 4 Helpful

March 14, 2017
Mezzanine the standout album. First two were great also. What a band, what style.
Reply Notify me 1 Helpful

December 27, 2015
One of a kind band, some might find it surprising how far they've come from their Wild Bunch hip-hop days.
Reply Notify me 2 Helpful

May 11, 2011
One of the best bands ever in every possible way, all of their albums are a must have!
Reply Notify me 10 Helpful