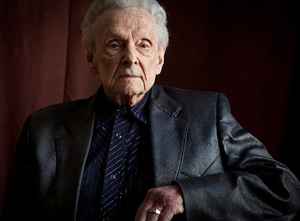 Growing up in rural southwestern Virginia, Stanley learned to play the banjo, claw-hammer, style from his mother. It was her inspiration, coupled with Stanley's natural ability, which led Ralph and his older guitar-playing brother Carter, to form the their band, the Clinch Mountain Boys, in 1946. Drawing heavily on the musical traditions of the area - the holiness singing of the Primitive Baptist Church and the sweet down home family harmonies of the Carter Family- the Stanleys began honing their own special style of music by singing at local events in the early 1940s.

Ralph and Carter performed as The Stanley Brothers with their band, the Clinch Mountain Boys from 1946 to 1966. After Carter's death in 1966, Ralph Stanley continued to perform, eventually reviving the Clinch Mountain Boys. Larry Sparks, Roy Lee Centers, Ricky Skaggs, Keith Whitley, and Charlie Sizemore were among those with whom he played in the revived band. Stanley has maintained an extensive touring schedule, with dates scheduled through 2007. Known in the world of bluegrass music by the popular title, "Dr. Ralph Stanley" (after being awarded an honorary Doctorate of Music from Lincoln Memorial University in Harrogate, Tennessee in 1976), Stanley was inducted into the International Bluegrass Music Hall of Honor in 1992 and in 2000, and became the first person of the new millennium to be inducted into the Grand Ole Opry.

In 2006, he was awarded the National Medal of Arts. Stanley's work was also featured in the 2000 film O Brother, Where Art Thou?, in which he sings the dirge "O Death." With this song, Stanley won the 2002 Grammy Award in the category of Best Male Country Vocal Performance. He's featured in the Josh Turner hit "Me and God," released in 2006.

Rest... In... Peace... by crimsonmetal74
1000 Bands I've Seen Live by spacemanfromthepast
2016 - A Tribute To the Artists Who Have Passed This Year. by soulchap
View More Lists →