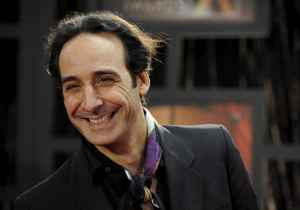 At the age of five, Desplat began playing piano and also became proficient on trumpet and flute. He studied with Claude Ballif, Iannis Xenakis in France and Jack Hayes in the USA. He was also influenced by South American and African artists and teachers, among whom were Carlinhos Brown and Ray Lema.

Desplat has extensively composed for films, first in France and later in Hollywood, including scores and incidental music for some 100 films. He has also composed individual songs that have been sung in films. His most known works include the scores to "The Painted Veil", "The Queen", "The Beat That My Heart Skipped" and "The Curious Case of Benjamin Button".

In addition, he has written music for the theater, including pieces performed at the Comédie Française. In addition to his composing and performing, Desplat has also given Master Classes at La Sorbonne in Paris and at London's Royal College of Music.