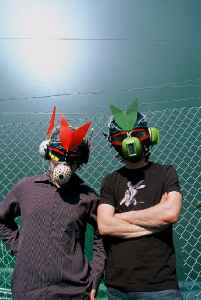 Profile:
Bondage Fairies is a band from Stockholm, Sweden. Their music is described as "Pixies on acid", an offspring of punk and electro. Mr. Elvis Creep started the band after being rejected from art school and was soon joined by Mr. Deus Deceptor, a computer scientist in progress. They shared the same love of death-punk, video game music and beer. After a failed career of making radio theater, they're now only into making music.
Sites:
Facebook
Members:
Bee Bee Prime, Deus Deceptor, Drummer Boy (4), Elvis Creep
Variations:
Viewing All | Bondage Fairies
Bondage Faires

The first 2 albums of the band were so cool that I was blown away when I first heard them. But the latest albums are just a kind of sad joke and a circus of freaks. I'm afraid that the inspiration has left the band.