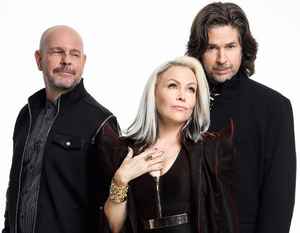 October 6, 2016
a very young Terri Nunn is a major star in the movie "THANK GOD IT'S FRIDAY" so she should be credited as being known as an actress as well.
See 2 replies

Most people remember Berlin for "Take My Breath Away", the love theme from Tom Cruise's 1986 blockbuster Top Gun. A gold-certified number one hit in the US and UK, this single was incredibly one of the key factors in the breakup of the band (but more on that later).

It all started much more modestly in 1979, when the Orange County (CA) band released their first single "A Matter Of Time". Fronted by a teenage Terri Nunn and with main songwriting duty performed by John Crawford, it set the blueprint for a sound that the band would see develop into major success.

However, things very quickly took a diversion when Terri Nunn decided to temporarily leave the band to try her hand at acting. Toni Childs very briefly took over and wrote some material, but when it came to recording the album "Information" in 1980 it was a new singer, Virginia Macolino, who took control. A fantastic debut, it contained ten condensed punky New Wave tracks with a pronounced synthesizer sound. Alas, it made no impact on the major radio stations so chart success was not forthcoming.

After the departure of Virginia Macolino, Berlin as a band took a short break. John Crawford set up a new act, Farenheit, who actually went as far as shooting a promotional video for a track called "Dancing In Berlin" with John on vocal duty. Of course, this song would see light a few years later fronted by a certain Ms. Nunn. Speaking of whom...

...fast forward to 1982. Terri has come back from her acting career, Berlin are reformed and release "Sex"…

With lyrics that ensured radios got in a sweat and a video sure to ruffle feathers, it was an instant hit. An irresistible Bobby Orlando style bassline under Terri's suggestive vocals guaranteed heavy club play, and it paved the way for a follow-up single of epic proportions; The Metro. Fast paced New Wave sonics over Terri's passionate vocals evoked thoughts of European dreams, much to the delight of many American kids who looked outside of the traditional rock 'n roll ethos. The Metro was covered excellently by the metal group System Of A Down in 2001, opening the band to a new legion of fans that may never have discovered Berlin otherwise.

After The Metro, a third single from Berlin's "Pleasure Victim" EP titled Masquerade was released to ensure that Berlin left 1983 with rising popularity and critical success.

1984 saw Berlin release their second full album "Love Life", a consistent and excellent LP with a mature yet still playful sound. Giorgio Moroder produced two fantastic singles, "No More Words" & "Dancing In Berlin", and a further single (the James Bond inspired "Now It's My Turn") merely scratched the surface of the band's confidence.

Moroder was working on "Take My Breath Away" for the movie Top Gun but needed a strong female vocalist to front the music he had written. He called up Terri, who of course jumped at the chance of working on a major movie soundtrack. Unfortunately, Moroder was not in need of the services of John Crawford and the rest of Berlin. So while the song went down in history as Berlin's biggest hit, it didn't actually feature the band at all! This obviously caused tension between the band members, as after 1986's "Count Three & Pray" (which contained strong songs marred by the typical bombast of late 80's overproduction) Berlin officially disbanded.

Thankfully the in-band resentment has been resolved, as the band happily reformed for a one-off special in 2004 for the VH1 show "Bands Reunited". As of 2013, Terri still tours and records albums as Berlin with a new lineup while the rest of the original band are now content in their own lives away from the limelight.