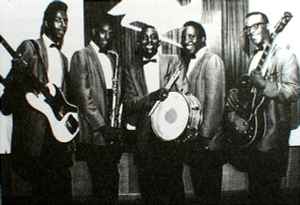 Profile:
Cincinnati, 1965-72
Leroy and the Drivers were led by singer Leroy Jones and sax player Randy "Butch" Yates. The band was self contained with guitar, bass, and drums along with Leroy and Butch. They recorded a couple 45s of R&B styled soul for Coral records. Their first 45 "Blow Wind/ L-O-V-E" seemed to have made some sales.
The 2 45s were credited to famed local artist Kenny Smith and Cincy's Accident records. Kenneth Hawkins is credited as co-writer with Leroy Jones.
In 1970 they recorded their third and apparently last 45. The Butch Yates composed "Sad Chicken" is a deep funky instro with Yates getting some crazy tones from his sax. The 45 has become a favorite in the modern day funk scene. The 45 was released on the Duo label from Chicago. Legend has it that, having booked a studio to record their single Rainy Night In Georgia, they didn’t have anything prepared as a flipside and created The Sad Chicken as an impromptu jam. It all fell into place there and then and was complete.
Leroy Jones, Mike Chappell - Bass, Randy 'Butch' Yates - Saxophone, Reggie Cavinaugh - Drums, Jimmy Valdez - Piano, Jimmy Welch - Guitar
Members:
Butch Yates (2), Jimmy Welch, Leroy Jones (2), Leroy Smith (13), Mike Chappell, Reggie Cavinaugh, Willie Price (2)
Variations:
Viewing All | Leroy & The Drivers
Leroy & Drivers, Leroy And The Drivers