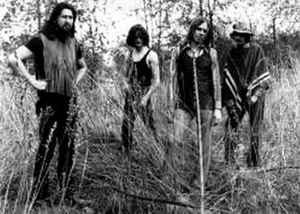 Formed in 1968 by vocalist / guitarist Joe Periano, who was joined by bassist/vocalist Bill Jones, drummer Bob Michalski, and organist Dennie Webber. Initially going by the name of Gangrene, the quartet became the unofficial house band at the Wooden Nickel club, where they were spotted by a local manager. Motown subsidiary Rare Earth signed the band on the condition they find a new name. Having decided upon Power of Zeus they began work on what would become their sole album The Gospel According To Zeus, released in 1970. Though a flop at the time, the LP has become highly sought after with crate diggers.
Sites:
getondown.com, allmusic.com
Members:
Bill Jones (17), Bob Michalski, Dennie Weber, Joe Periano
Variations:
Viewing All | Power Of Zeus
The Power Of Zeus

June 29, 2016
The photo above is not Power of Zeus,but Big Brother & The Holding Company w Janis Joplin.
Reply Notify me 1 Helpful