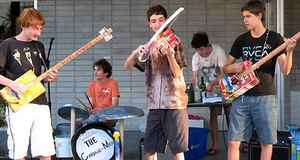 Profile:
From Wikipedia: Formed in 2010, The Garbage-Men are an American musical group of youths from Sarasota, FL teaching sustainability through music. The band promotes recycling by playing music on instruments they make from garbage and recycled materials. thegarbagemen.com