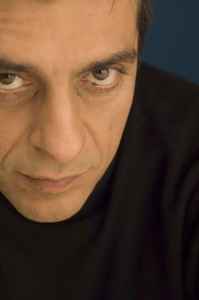 Mick Karn was a one-off and an all-round artist. He emigrated to the UK from Cyprus in the early 1960s and met the three other founding members of Japan at Catford Boys' School in London. Japan became one of the most celebrated bands of the 1980s, and their popularity is only increasing today, with huge interest in the original, subsequent and solo music of the various members and a new book, "Japan: A Foreign Place", by Anthony Reynolds (due in 2015). Japan split in 1982, bowing out after a hugely successful world tour and accompanying album, "Oil On Canvas".

Inside and outside Japan, Mick developed a distinctive and original bass sound instantly recognizable as his own. Mick was mainly a self-taught musician and many feel he changed the perception of how the bass is played and heard forever. His rubbery, unique playing led best friend and Polytown band mate David Torn to say of Mick, "It's as if Bootsy Collins was from Morocco." He also played woodwind instruments, mainly clarinet and saxophone, and many others.

Mick was a celebrated sculptor as well as an author and chef; he later qualified in psychiatry. He spoke several languages and in 2009 published his autobiography, "Japan and Self Existence," available from www.lulu.com.

After Japan, Mick worked in many areas of music, experimenting in jazz, ambient and prog, and continued to create his own indefinable music as a solo artist and in collaboration with other great musicians, including ex-members of Japan.

His first solo album, "Titles", and the first Dalis Car collaboration, "The Waking Hour", give those new to his music a good place to begin to discover it.

This man's bass playing will live on forever, he did have an unbelievable feeling on those strings. RIP

January 15, 2011
Been a fan of Japan and Mick Karn since the mid '80's. So very saddened to hear of his passing. He was an enigmatic and creative artist and played the bass like no other. He will be greatly missed. RIP Mick, you will not be forgotten.
Reply Notify me 3 Helpful

January 10, 2011
Just discovered his works today, and was very bummed (sad) that he passed away just 6 days ago.
Reply Notify me 1 Helpful

Merzdős number by lehapanin666
Artists Played On “Dark Wave” by crimsonmetal74
Collections mp3 DVD by deepinsoul
FAVOURITE ARTISTS 1981 - 2021 by panis
Legends by BassLobster
Avantgarde/Experimental by BassLobster
Fav bassists by BassLobster
25 Favorite Personalities of contemporary and future jazz by dove_m
Great Bass Players by markm65
Artists for the Future by Milesbeet-hoven1
Favorite Artists by vladimir.ursinovich
Creative Artists to Savour and Favour Until the End of Time by jneal777
my favorite artists by giovanni64
Artists I've seen live by my_past_is_yours
View More Lists →