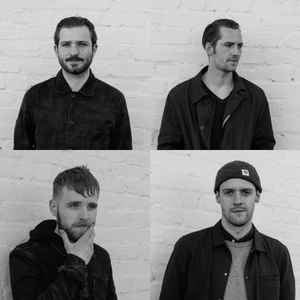 Profile:
Formed in 2011 at the Glasgow School of Art, Holy Esque have spent the past few years building a solid reputation as one of the most exciting bands to emerge from the independent scene. Winning high profile supporters across the board from BBC Radio 1’s Jen Long, Ally McCrae and Huw Stephens as well as NME and The Sunday Times Culture, their distinct brand of arena style hooks, post-punk rhythms, and lead singer Pat Hynes’s unique trademark vocals have led the band to open for Wu Lyf, Peace, Money and Big Deal, as well as supporting Haim on their UK tour and accompanying The Raveonettes throughout Europe.

After spending 2013 performing everywhere from The Great Escape, CMJ, Berlin Music Week and South by Southwest, as well as a guest slot on the BBC Introducing stage at Glastonbury, Holy Esque kicked off the new year with the release of their new single ‘Silences’. Recorded in Glasgow’s Gorbals Sound Studios and mixed by double-Grammy award producer Jon Schumann (Kashmir, Mew), ‘Silences’ is an irresistible and energetic gem of a tune, filled with glittery guitar lines and a care-free positive tone that solidifies the band’s position as THE ‘name to watch’.

“Thrilling to the ears” DIY