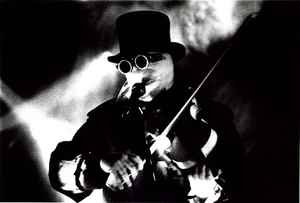 Real Name:
James Jeffrey Plewman
Profile:
Nash The Slash (born Jeff Plewman, 29 March 1948 - 10 May 2014) has been creating his unique concept of sound and vision for over twenty years. His first live presentation of music to film was a performance to the surreal silent film "Un Chien Andalou" at the Roxy Theatre in Toronto.

Nash The Slash was born of silent film. The name comes from a killer butler (The Tipton Slasher) encountered by Laurel and Hardy in their first film 'Do Detectives Think?' in 1927. Nash the musician has gone on to create the music scores for such recent cult films as "Roadkill" and "Highway 61' - both directed by Bruce McDonald.
Between experiments with film and music Nash The Slash became first a familiar name to music fans through his association with the pop electronic group FM. Having co-written the hit songs "Phasors on Stun " and "Just Like You" Nash established his credibility as a versatile artist. His talents have been recognized with a U-KNOW (later called CASBY) award for best instrumental artist as well as a JUNO nomination for best new male vocalist.
Nash's profile was raised on the international stage when he toured the world with the likes of Gary Numan and Iggy Pop. Other high- profile shows include opening for The Who at C.N.E. Stadium in Toronto to a crowd of 70,000 people, and opening for The Tubes at a sold-out Maple Leaf Gardens.

He started his own independent label, Cut-Throat Records and was the first Canadian to use a drum machine on record when this was still considered illegal by laws of the Toronto Musician Association.
Nash has released numerous solo albums, the best known being 1980's "Children of the Night" with the hit single "Dead Man's Curve". Other albums include "Decomposing", the first record playable at any speed (reviewed in Playboy Magazine 1982) and "American Bandages", a collection of all-American Rock classics.
Nash has recorded new music for the silent film classics "The Cabinet of Dr. Caligari" (1919) and "The Lost World "(1925) and for other silent film classics including "Nosferatu "(1922) and the original "Phantom of the Opera"(1925).

May 1, 2003
Nash The Slash is a modern genius. Highly regarded by both
peers and fans, the guy is completely unique is the modern
music scene. Genres covered are as wide as thrash metal,
electro,and pop, thru to classical and classical punk.
Nash the Slash is a multi instrumentalist who can play just
about any instrument you can throw at him, although his
instruments of choice are the electric mandolin and electric violin. He is also an accomplished harmonica
player and a demon glockenspiel player.
Nash the Slash's trademark is that he appears on stage
with his face covered in bandages, and usually is a
white top hat and tails suit. His stage show has to be seen
to be believed. Nash's recent releases include most of his
back catalogue re-released on CD in 2000-2002, and his 2001
film score to the classic movie 'Nosferatu'.
A CD to check out is his 1998 release titled 'Thrash'.