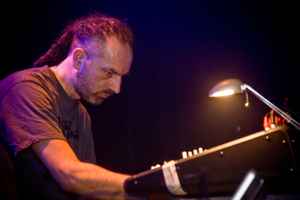 Real Name:
Ruud Lekx
Profile:
Dutch producer Rude 66 started his first band in the 1980’s and released his first EP in 1994 on Bunker Records as the 2nd ever artist on the label.
He can be considered one of the earliest influences for what is now known as "West Coast sound of Holland".
With his wife Shaunna Lekx often on vocals and vocoder, Rude combines Electro and Acid with Italo, Wave, and Industrial, while their songs are populated by shady characters such as dictators and serial killers.
The duo have played live (and done the occasional DJ set) from illegal squats to large festivals all over the world since the mid of the 90s.

As a mastering engineer, Rude specializes in vinyl mastering and restoring old tape recordings for reissues. Masters are both credited to Rude 66 or Ruud Lekx.