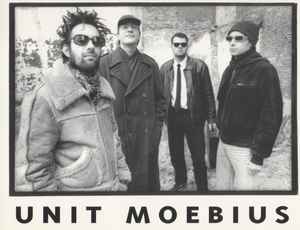 Profile:
Starting as Europe's only true answer to Underground Resistance, the godfathers of the Hague's industrial techno/planet rock scene, evolved gradually from deep alienating lo-fi acid house and crazy rigid jack trax (mixing the best of the detroit and chicago styles) to hard pounding dark industrial techno, freaky techno funk pop and mean minimalistic machine music. Raw primitive production and sound (the first 7 albums were recorded on a nearly-broken cassette recorder - it was all they had!), very diverse in style, but always with that typical twisted, paranoid and fucked-up drive, a bad sweaty groove that feels like a mindfuck.

June 17, 2016
These four men walked amongst the skinheads and gelled slick playboys of the Dutch aristocracy shining a white light over the whole of the world with their pure true to themselves spirit. The picture will be an icon of the birth of the dutch free spirit that would culminate in the birth of hardcore when DJ Rob started to introduce drums into his music whilst mixing at Parkzicht.
See 1 reply