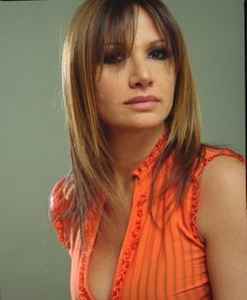 Real Name:
Emanuela Gubinelli
Profile:
Italian singer born on the 11/19/71 in Matelica (Macerata)
All things written about her before are inventions to create the character (born in America, studies in the United States, etc., etc.). The simple truth is that her boyfriend was an American model from Santa Monica and helped her to write the lyrics in English.
She started gaining credibility as author when the 2 songs (Say Yeah and Keep On Jammin) she had written for Stefano Secchi became hits. This allowed her to restart her singer carreer and to record songs such as One Love the Lifetime, Living 2 Love and Baby Don't Stop that had some success in France and a few other European countries. She also released a single under her real name Emmanuella, entitled Satisfied, in collaboration with Bruno Sanchioni.

It is less known that she also contributed to many projects which had success mainly mainly in Japan : Linda Ross, Morena (2), Jilly, Ann Sinclair, Vanessa, Gisele, Paula Marsh, Serena, Maggie Sue, and many more..

But success came as she was a vocalist featured by the duo Cozzi and Rossi (CO.RO.) on the version they had made to Because The Night (a cover of Patty Smith and Bruce Springsteen). Her voice appeared also on There's Something Going On/I Break Down And Cry, and on the following album that Co.Ro released in 1993. After her singles with Co.Ro became a hit in America, Emanuella decided to go solo again.

One of her first solo singles as Taleesa was I Found Luv, written by G. Amir Saraf and Uli Brenner, produced by Giacomo Maiolini featuring raps of Mikey Romeo. After that, she returned to Italy and released many other songs, like Burning Up (that she co-wrote and co-composed with Trivellato and Sachetto), Falling In Love (produced by Visnadi under Flying Records, re-released by ZYX), Let Me Be (that she co-wrote and co-composed with W. Cremonini, A. Gilardi, produced by Giacomo Maiolini and released under Time Records) and a country dance called Jambalaya, cover of an old rock song.The following release was called I Wanna Give. She started touring all over the world, she even presented some TV shows in Brazil where she also gave live gigs in discos.

In 1996, Taleesa started a new collaboration with G. Spagna : her name appears on Paul Rogers' Wanna Be My Lover and Morena's Music Take My Breathe Away.

2002 : she kept on collaborating with De La Cruz for their new single, the very nice There's No Right.

2003 : Taleesa released a new single under her name, the song was entiled Over You, and the music was Kylie Minogue style. The single was published by Vale Music Spain, written by Michael Corkran (her boyfriend), Emanuela Gubinelli herself, and V. Gaffurini. It was produced in her own studios Luv-en-colors.

Later the same yer, she recorded with Aron Michael a single for DJ Stefy entitled The Promise You Made. She already started working on a new single...

In October, she recorded a new single for De La Cruz In My Mind. The new single was released under Elite Records, the new label that DJ Richard & Johnny Bass (the brothers who stand behind De La Cruz) created after leaving Vale Music.

2005 : Taleesa recorded a new song for De La Cruz called Where U Belong. It entered the American chart at #35.