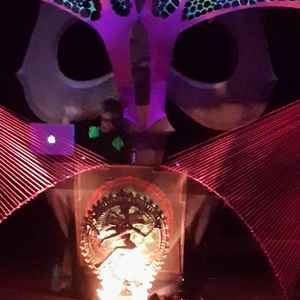 Franco Forte was passionate about electronic and psychedelic music for a long time (King Crimson, Pink Floyd, Brian Eno, Terry Riley), but was attracted to all music styles. He first listened goa trance music in 1995 during his first trip to Goa, India. When he went back to Italy he met the girls and guys of GoaHead Group (party promotors) sharing the same taste in music and starting the friendship and collaboration with Alessandro Dardi (aka Dj Ale). In '97 -'98 Franco took actively part in the organization and production of first italian Goa parties in Bologna together with Space Spices Group.
With the beginning of minimal style in psychedelic music at the expenses of the melodic goa trance style, Franco decided to purchase his first computer beginning to study music programs. He was helped by some friends, the so-called "Chillum Smokers" and tried to produce music that gives him the same sweet feelings of that 'old style'. It was through his work with Dj Ale (Franco & the Chillum Smokers) that they were able to produce the first completed tracks together.
In 2011 he started the Tranceway project, composing, experimenting and producing new rhythms and sounds while remaining in the tradition of goa trance music style (today called new school) also influenced by modern psychedelic music.
Since 2013 he played his music at parties in Italy and abroad, including: Human Evolution Festival 3rd and 5th edition, Rotta su Goa 6th and 7th, Summer Wave Festival, Salento Tek Festival 2015, We Are Light 2016, Utopia Valley 2016, 9BAR in Goa, Mahashivrati Festival 2017 (Nyex club Anjuna Goa), Shankra Festival 2017.
Sites:
Facebook, SoundCloud
Aliases:
Franco Forte