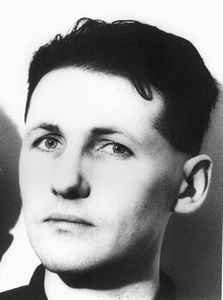 Real Name:
Michael Wells
Profile:
One half of GTO together with late Lee Newman.

March 5, 2022
An interview with Michael Wells from Technohead and GTO conducted in August 1997.

The success of Technohead is not the most representative introduction into the magic world of Michael Wells. Besides the happy hardcore of "I Wanna Be A Hippy", Michael, currently living in Amsterdam, is a specialist in minimal techno, triphop, electro, hardcore and other experimental undefined exercises within electronic landscapes. Central theme: change. Because one has to go further and further forward to cope with the rapid changes within our postmodern society.

Thus the philosophy of Michael Wells in a nutshell. The commercial mainstream music never attracted Michael. At the end of the eighties he and partner Lee Newman were heavily influenced by hip hop, heavy metal and industrial music. According to that the result, Greater Than One can best be described as an estranged mix of industrial, electronic body music, heavy beats and a shed full of samples. Michael: "We had lots of fun in those days. We learned how to use our equipment properly and combined everything with everything. Those records have still got a cult status in the U.S. but I am still using the same sort of methods. A sort of deconstructivistic way of working, almost the same as making a collage." The constant desire of renewal infected Michael and partner Lee with the rapidly spreading dance virus. New projects like Tricky Disco and G.T.O. (which stands for Global Techno Organisation) were born. Projects in which especially the influences of the European electronic music were dominant. "Detroit techno sounded just like soul music to me, not like real techno. It had it's time and place, but please I don't want to hear it anymore. I was influenced by things like Kraftwerk, Einsturzende Neubauten, Laibach, and Throbbing Gristle. The whole concept behind Greater Than One was based on the thought that every single track had to be totally different."

BREAKING THE MUSICAL RULES
Especially by the superb techno of Tricky Disco, brought out by the Sheffield based Warp-label, Michael gathered some reputation within the techno scene. At the same time he brought out all kinds of electronic music under names as Church Of Extacy, G.T.O., John & Julie, and T.D.5. Michael: "I love to think of all kinds of different names and concepts. With all of them I made different music. I certainly am not a purist who only wants to make techno on a 303 or 909. That's like painting the same picture again every day. As soon as something gets a formula, you have to break with it." This breaking with the rules of a music genre, leads to critics from style purists time to time. Critics that prevent Michael from being accepted within a genre. But that doesn't matter, it keeps him sharp and open minded to follow the latest developments in music, arts and society as a whole. "I am strongly influenced by Joseph Buys [the most important representative of the European fluxus-movement - TP], an artist who saw art more as a way of life. During my art study his vision changed my entire way of thinking. He gave me the feeling that the most important thing is to believe in yourself, in what you're doing. That's the most important thing in the world but also the most difficult to achieve."

HAPPY HARDCORE
Michael lost the faith in the old art-forms completely. Not painting and sculpturing, but the computer shows us a new way of creativity, a new vision of the future. At the moment everybody can make her or his own music, make their own magazines and art without being dependent on society and without putting directly a value on the achieved. That is why Michael doesn't understand that most people are so negative about hardcore and gabber. Gabber means for a large group of people more than just music, it's a kind of way of living for them. That makes it not very relevant what others might think of it. Many people, especially dj's keep asking me why I make that kind of shit.... while it is one of the most important and influential developments of the last few years." At the moment gabber and hardcore seem to have become commercial marketing-terms. With Technohead, Michael stood at the cradle of the success of Happy Hardcore. Especially in England and Holland the single I Wanna Be A Hippy sold very well. The actors in the video clip who were running up and down the Vondelpark (shooting location in the heart of Amsterdam) also benefited by the huge sales. They formed the Party Animals. Michael: "The single is often related to them. I don't mind at all! Not that I wouldn't made it when I knew it's impact right away, but most people judge me because of it. It was one of the first Happy Hardcore records ever though."

REPRESSIVE TOLERANCE
Meanwhile the Dutch charts are dominated by weak tunes accompanied by futile lyrics. "All those recent Happy Hardcore hits are confusing people. They really think that commercial stuff is Gabber. While the real Hardcore has gone back to the underground. It's like a natural process. The commercial success attracted many people who only want to make money out of it. Hardcore means music on the edge. When you hear 2 Unlimited sing hardcore..hardcore..that sounds really very funny." It looks like the real hardcore doesn't have any right to exist anymore. Every new style is directly translated into popular styles and trends by the almighty mass industry. Ready to be served. A mechanism of our post-industrial society which the critical theory of the Frankfurt School has been calling Repressive Tolerance. "An interesting phenomena", philosophizes Michael, "the mass media is at the moment very good in assimilating rapidly to the changes in our society. People have become more aware of things, but are on the other hand much easier to manipulate. Nobody can be an outsider anymore. It is a matter of being aware of the fact that you will not be playing the role of the victim. It depends on how much own decisions you wanna make."

BOUNDED FREEDOM
In our highly developed society nobody has the possibility to take the position of the outsider anymore. The effects of the recent technological changes have consequences for nearly everybody. Also the generally accepted definition of freedom is based on a naive belief in the perfect society. "I don't think people are really free. They own a licence to live. But don't be too free. You have to live with lots of constraints, but that doesn't mean you can't be creative. I don't think politics is like walking down the streets with a flag, shouting slogans. Politics is shopping. When I am in a supermarket I can make clear decisions by buying certain products. For me that is socialism in its purest form: every individual is capable to change things by take responsibility of his own actions." Micro actions that lead to major changes: Michael's own interpretation of Chaos Theory. A vision that is clearly found on his music. Especially the Signs Ov Chaos album "FrankenScience (Urban Cyberphunk)" has many references to chaos and order. Order is nothing more than a compulsive human construction to bring order in an illogical environment. The solution is deconstruction of all known acquisitions. All that is left can be built again enriched with new insights. A postmodern vision that is also being interpreted by great thinkers like Deleuze, Lyotard and Baudrillard.

VERLEGGEN VAN GRENZEN
It is also a way of working which Michael has in common with the German Mille Plateaux Label (named after the main work of Deleuze) and the Berlin Digital Hardcore scene. Alex Empire didn't get his place on the Technohead 4 compilation on purpose. "I know Germany quiet well. I was present at the first Loveparade and MayDay-raves and tasted the positive and creative sphere there. Alex is using modern influences in his music like drum & bass. He is very aware of all new things that are going on in the music business. So there is a difference between his and my work."

MICHAEL JACKSON
At this moment Michael is working on several projects at the same time. The most important release is a compilation full of new experimental music at the end of this year. It is electronic and soundscape-like and also very trippy, looped and repetitive. The music is related to the London Electronic Lounge Club who has gathered a whole independent scene around its theme nights. Scanner is performing there regularly. The result is very minimal. "You could describe it as a post-Bristol thing." On short terms we can expect an album under the name The Man. The fantastic minimal techno of "Phunk Box" will not be brought out in The Netherlands. "Too underground", record company Edel/Roadrunner concluded. The new Michael Jackson e.p., a collaboration by Scanner and Sign Ov Chaos will be out in summer. "It represents three tracks by Scanner and three tracks by Sign Ov Chaos. That collaboration went very well. We both will be performing in Koln this summer, where we will play some songs by Michael Jackson. I guess three at one time, scratching them or something like that," Michael presumes, "I hope he shows up himself."