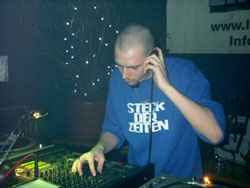 Real Name:
Gunter Schneider
Profile:
Gunter Schneider, better known as G-I-S, has been spinning electronic music since 1992. Early 1995 he started producing his own drum & bass tunes. Five years later he founded his label Intransigent Recordings and unleashed his first singles. Since then, he released on many renowned labels, such as Position Chrome, Pressure Chamber and Hardline. He has worked together with many artists, like Tech Itch, Evol Intent, The Panacea, Counterstrike and DJ Hidden to name a few. As a DJ, G-I-S is known for his intense sets, including many exclusive tracks. He has played out all across Europe, in cities like Berlin, Bratislava, Ghent, Hamburg, Moscow, Riga, St. Petersburg, Vienna and many more, on a range of major events, such as Therapy Sessions, Kings Of The Jungle and Pirate Station, the world's biggest drum & bass festival.
Sites:
Facebook
Aliases:
Gunter Schneider
Variations:
Viewing All | DJ G-I-S
DJ GIS