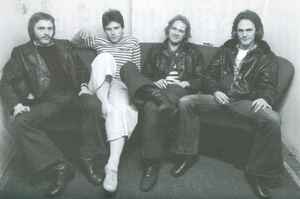 Started as a band in 1974 coincident with lyricist Carsten Jørgensen taking the middle name Valentin. The band was essentially the final line up of the likewise Lyngby based band, Blues Addicts.
In somewhat obscurity they released their first two albums En Stynet Strejfer (1974) and T-shirts, Terylenebukser & Gummisko (1975) on the small Hookfarm label, but immediately after releasing the 1977 album Storbyens Små Oaser on Metronome they had their first breakthrough. This and the following two albums for the label produced several national hits, most of them combining Jørgensens catchy tunes with his characteristic sarcastic, semi-political lyrics. This line-up got the nickname "Det Ganske Lille Band" (The Quite Small Band), the title of the first track on their third album.

After five albums and extensive touring, Jørgensen felt burned out, and announced he was leaving the band. Jørgensen had a full set of songs ready for their next album, but they were recorded without Jørgensen and released as Lampefeber by the remaining band under bandname C.V. Moto.

A year later Jørgensen felt ready again, and was looking for a new backing. New line-up included bandmembers from Delta-Cross Band releasing Tidens Tern (1980). That album has become one of the 10 non-classical albums on the offical Danish cultural heritage-list. The album has been the greatest hit for C.V. Jørgensen, now headlining in the biggest national venues.