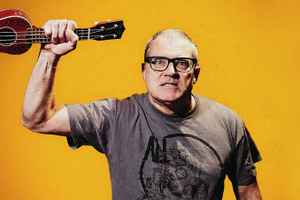 Profile:
Milo Aukerman is vocalist for the American punk rock band the Descendents. Although not a founding member, he and drummer Bill Stevenson are considered the core of the band by most fans and the band's iconic mascot is based on his image. Aukerman was a high school classmate of Stevenson and founding Descendents guitarist Frank Navetta and was a fan of the band to the point where Stevenson would later claim that Milo would force Stevenson to pick him up and take him to their rehearsals. At the time, Navetta and bassist Tony Lombardo handled vocals but after Milo asked to sing some of their songs at practice Navetta suggested adding him to the group. Milo made his debut on the group's 1981 "FAT E.P." The band's first LP, 1982's "Milo Goes To College" was the first release to feature the Milo mascot which was based on a drawings made by a classmate to taunt Milo. The title of album was a reference to the fact that Milo was, indeed, leaving the band and going to college to pursue his first love, which was science. The band returned as fell-time force in 1985 and remained that way until 1987, when Milo again left the band to pursue his studies and the rest of the members formed ALL. After the end of the Descendents, Milo's music career was limited to appearances on ALL albums and a short-lived band called Milestone. In 1996, the Descendents reunited for a new album called "Everything Sucks". The album was well-received but Milo left the band again after some touring, later stating that despite his love of music, he starts to lose interest when it starts to feel like a job. The group released another album in 2004 but opted not to tour for it. Since then, Milo and the group have made sporadic live appearances and continue to record when their schedules, which now include day jobs and families, allow.
Aliases:
Rebuke (3)
In Groups:
Descendents, Milestone (7), Quaranteens
Variations:
Viewing All | Milo Aukerman
Aukerman, M. Aukerman, Milo, Milo Auckerman, Milo Jay Aukerman