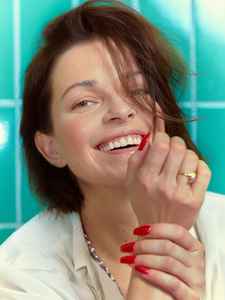 Petra Marklund is internationally best known as dance-pop artist September, mainly produced by Jonas von der Burg. Her tracks "Satellites" and "Cry For You" made it to respectively #8 and #1 on Billboard. The latter was nominated for the Government's Music Export Prize 2008 in Sweden for selling over a million copies worldwide.

In homeland Sweden, Petra had her biggest hit in 2010 with a cover of Petter's "Mikrofonkåt". The track entered the Swedish charts at #1, holding the spot for 11 consecutive weeks, and was certified 8x Platinum.

September tracks are influenced by euro house, hi-NRG and downtempo, but it's really just dance-pop of the highest quality. Smooth production and clever songwriting, mostly by the likes of Jonas von der Burg and his team. Remixes vary from big hard trance mixes to jazzy candlelight edits which show off Petra's vocal capabilities even more.

Under her real name, Petra has released a bunch of Swedish pop/rock/electronica songs. "Händerna mot himlen" (penned by Kent's Joakim Berg) has become a true classic already, certified 6x Platinum at the time of writing. September song "Mikrofonkåt" in fact received an even higher certification (8x Platinum!); both songs are obviously still in regular rotation on Swedish radio.