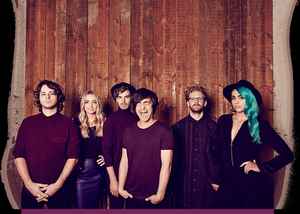 Profile:
Sheppard is a Brisbane (Australia)-based indie-pop band. Originally formed in 2009 as a duo consisting of siblings Amy and George Sheppard, they expanded by adding Jay Bovino in April 2011 before reaching their current six-member state, including the third Sheppard sibling Emma.
They have released two singles to date and one extended play under their own label entitled Empire of Song. Their second single "Geronimo" spent three weeks at number one, knocking Pharrell Williams' single "Happy" from the top spot after its 12-week run.
"Geronimo" was accredited platinum by ARIA in April 2014. "Geronimo" is the first #1 single to be recorded in Brisbane.

October 16, 2018
I Just seen Sheppard Perform LIVE with Cheap Trick & Foreigner in day in the Park , Adelaide, definitely not my Cup of Tea, I thought their songs were too basic musically, and very average , how on earth did they get booked to support greats like Foreigner, maybe they should of chosen a better Band than that..