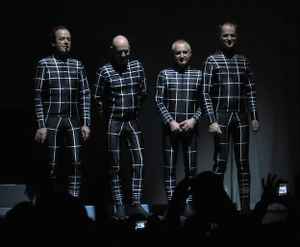 Profile:
Kraftwerk is a German group that has transformed several times since its humble start in Düsseldorf 1970. playing Krautrock > Electronic Experimental > Electro-Pop. Formerly known as Organisation, Kraftwerk debuted live as the trio of Ralf Hütter, Florian Schneider-Esleben and Charly Weiss at the Tivoli Popfestival, Aachen on 11 July 1970. Klaus Dinger took over as drummer after that. Gigs between 26 December 1970 and 31 July 1971 omitted Hütter, with various line-ups including Michael Rother and others. After a gig in the Weserberglands of Germany on 31 July 1971, Dinger & Rother then split-off forming Neu!. Shortly after, Hütter returned. First known Hütter/Schneider gig is 22 November 1971 at the Sachsenwald Gymnasium, Hamburg, which instigated the partnership that developed into the well-known electro pop band continuing for decades with an expanded line-up after the 1974, international hit single Autobahn.

Maxime Schmitt has been a close friend of the group as well as an advisor and collaborator.
Emil Schult has also collaborated on many releases, contributing both lyrics and graphics.

There have been 22 albums and 24 compilations as releases by Kraftwerk since the band formed in 1970. Of these, seven have appeared in the "UK Top 40," music charts with 2 of them reaching the "Top 10," but no albums have reached the No.1 position in the UK. The albums to hit the Top 10 are "Autobahn," and "Kraftwerk - Die Mensch·Maschine," and together they have spent 7 weeks in the UK Top 10 charts. All 9 charting albums, have in total, been in the UK Chart’s for 66 weeks and within the Top 40 for 33 weeks.

The 12 Kraftwerk hit singles/EP's have spent time in the UK Top 40 music charts for 43 weeks and 79 weeks in the charts overall. The single spending the most time in the UK Charts is "Tour De France," (EMI 5413) which entered the charts in August 1983 and overall, spent 23 weeks charting at that time. The single made a brief reappearance in the UK Charts in October 1999 with the CD single (EMI 8874210) release "Tour De France," but for only 2 weeks and this did not score as a Top 40 hit.

May 8, 2020
What a sad thing to hear. Electronic music was never the same after these guys came onto the scene, and Schneider was such a driving force in making music better. I hate that he is no longer with us, but his wonderful music will be with us forever.
See 2 replies

May 6, 2020
all these musicians leaving us its saddening while I was growing up with passion for electronic music so many artists and music producers of music I enjoyed have gone life is cruel R.I.P

May 6, 2020
The Whole Electronic Music Community should know of Kraftwerk. Today is a sad day. RIP Florian Schneider.

R.I.P. Florian Schneider Schneider a true genius and the king of the vocoder.
..good trip Florian, on the highway to paradise

May 6, 2020
Sad to hear the passing of the Legendary Florian Schneider.. innovator, producer..R.I.P...

December 20, 2019
Those "anonymous interchangeable stooges" Henning Schmitz and Fritz Hilpert have now been in the band TWICE as long as Karl Bartos was.
See 1 reply

All things new and to certain measure extreme Kraftwerk ever did musically speaking or else purveryoring technology as a mean to composition , there is something even more fundamental implicated with their foundation. They were the messengers of a zeitgeist.
In the German context they represent the new post war Germany, the one achieved by total and literal deconstructionism, the one inmolated in rapid growth for progress, dedicated, souless, individualistic, productive, relativistic, cynical to a great measure.

For me it's rather interesting that German director Werner Fassbinder included Kraftwerk as part of the soundtrack for the adaptation of Alfred Döblin's Berlin Alexanderplatz back in the 70s. It's a gesture not exempt from political implications.

In the world context Kraftwerk is the angel trumpet announcing the beginning of a new glorious era, the triumph from liberal democracy and capitalism. Again. Unlimited progress, individualism but also the advent of a more veiled accent borderline with dystopia and apocalypse. All Kraftwerk epic tracks, unforgettable now in world culture are strongly political statements with intelligent display for mere entertainment.

Take for example "Autobahn". It depicts the progress dream envisioned by prewar Germany (both Volkswagen and autobahn were envisioned by Nazis) only now contextualized in different terms, the ones from post modernism and democratic capitalism. The lyrics are cyclic and somehow its repetition gives the indication of something unaccomplished

"Jetzt schalten wir ja das Radio an
Aus dem Lautsprecher klingt es dann:
Wir fah'rn auf der Autobahn" And it does start again...
The task seems endless but the mission is complete. The endless drive of progress...
A similar statement is veiled in Europe endlöss. A view that doesn't contain any limit and thus a place the individual is rather insignificant and apparent, such a mount of veiled solitude is alluded.

Radioaktivität is an obvious reference to the cold War but the most sinister undertone comes from the anticipation of nuclear disasters such as Tchernobyl or Fukushima and not just the menace of atomic war. "Its in the air for you and me... ".
And continues to be! Perhaps everyday more than before now.

The robots and Computerwelt, is it anything more obvious? In the original context from 1970s Germany is rather ubiquitous the presence of this robotic and souless world, human beings who act and live devoid of any meaning other than accomplishing the task of robots. The Kraftwerk performance of this track is absolutely explicit.
In the world of today this is our daily life. People spending half of their days and nights watching all kind of screens, computing, living automatically, frantically masturbating with multitasking, losing ground with anything that is not demarked by the function of the task itself.
"We are the robots".

Das model, been one of the most melodic of the tracks they ever made. It is so stylish and glamorous, just as the lyrics, yet, once again, symptoms of our times and the politics of reality appear.
This chick who is only reanimated by the flashlight or the attention from many men, who lives for her image and thus her appearance and seems to be an impossible "object" for the narrator is both the age of extreme narcissism we live today and the absolute dedication of been recognized by the exterior, social media anyone?
"It only takes a camera to change her mind"

Kraftwerk is contradictory. An envelope of automatic rhythms and simple notes, almost frivolous at times it seems... But never forget they are Germans.
True art is ambiguous and even apparent.
Pop for another 1000 years of culture, maybe a lot less than that...

February 4, 2018
Kraut rock, garage eletronic, ambient, electro (founders of the genre I would say) and synth pop and probably a few more styles. The precursor of the precursor. Legendary and untouchable. Amazing that these guys invented this sound so long ago and it still hasn't been been duplicated. I bow humbly to thee.