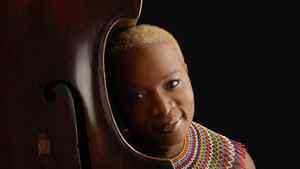 Angélique Kidjo grew up in Ouidah, Benin, a country in West Africa that sits snugly between Togo and Nigeria.

She was born into a musical family, her mother is a choreographer and director of a theater group, her brothers are instrumentalists and at the age of six she was singing and dancing in her mother's company and later joined her brothers' group, the Kidjo Brothers Band, where she sang a variety of Benin-style songs.

Growing up in Benin exposed her to a rich variety of music. She was heavily influenced by the traditional folk styles and love songs of the country - epic songs full of allusions to the history of the villages and the rituals and voodoo ceremonies of the older generation
but, perhaps more importantly, she was listening to the new urban African music percolating up from South Africa and the Western songs ranging from James Brown, Aretha Franklin to Jimi Hendrix that she heard on the radio.

The formidable South African vocalist Miriam Makeba was a great influence on the young Kidjo, so much so that Angelique, who was already making a name for herself, recorded an adaptation of a Makeba song for Benin radio. Her first hits followed and she toured the Ivory Coast.
It wasn't until Kidjo made the trip to Europe that her career came alive. It was Cameroonian producer, Ekambi Brilliant, who suggested that Angelique move to Paris to record and the singer left Benin for Europe.

Paris in the eighties was the breeding ground for the new African music and African artists, freed from the constraints of African tradition yet incorporating their roots with western styles were generating revolutionary sounds.
Delicately plucked guitars were mixing with rock drums and lyrics were tackling more worldly issues. Makossa from Cameroon, soukous from Zaire which is now the DRC and mbalax from Senegal was being injected with a new attitude and was taking over the dancefloors. Kidjo was in her element.

When she first arrived she sang and recorded with a group called Alafia and then joined the jazz tinged band, Pili Pili. She later recorded two jazz albums with Pili Pili and played with them at the Montreux Festival in 1986.
In the same year she joined forces with bass player and composer Jean Hebrail, and together they worked on their own music.
Through regularly working at Le Baiser Salé in Paris, she also met many African and Antillean musicians and was able to form her own group and release her first solo album, Parakou.
Sites:
kidjo.com, ayemusic.free.fr, Facebook, Last.fm, Twitter, Wikipedia, YouTube
In Groups:
"46664 The Event" Cast, Band Aid 30, Donnons Nous La Main, Pili Pili, Sing The Truth, We Are Family Collective
Variations:
Viewing All | Angélique Kidjo
A Kidjo, A, Kidjo, A. Kidjo, A.K., A.Kidjo, Ang Lique Kidjo, Ange'Lique Kid Jo, Ange'lique Kidjo, Angelique Kidjo, Angèlique Kidjo, Angélique Kidgo, Angélique Kidio, Angélique Kidjò, Anjelique Kidjo, C.A. Kidjo, Kidjo