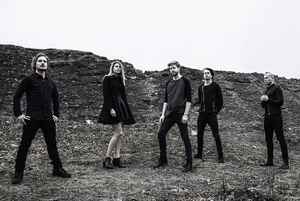 Profile:
Norwegian progressive metal band from Kristiansand.
The progressive metal band Rendezvous Point is one of the most exciting and promising bands from the Southern part of Norway. These talented musicians grab your brain and use it as a bouncing ball through rhythms beyond logic. Though the music is often heavy and advanced, there is always a layer of fantastic melodies performed by one of the most amazing voices in Norway, Geirmund Hansen. The epic arrangements of Rendezvous Point are truly one of a kind, and should really be experienced live.

The musicians in Rendezvous Point met when they studied rhythmical music at the University of Agder. In 2012 the band was titled the most promising band in southern Norway and held a concert with the Kristiansand Symphony Orchestra. They are now finishing their upcoming album with release date in the fall 2015. The band consists of Baard Kolstad on drums (Leprous, Borknagar, ICS Vortex), Petter Hallaråker on guitar (ICS Vortex, Solefald), Nicolai Tangen Svennæs on keyboard (Emilie Nicolas), Geirmund Hansen on vocal and Gunn-Hilde Erstad on bass.
Sites:
Bandcamp, Facebook
Members:
Baard Kolstad, Geirmund Hansen, Gunn-Hilde Erstad, Nicolay Tangen Svennæs, Petter Hallaråker