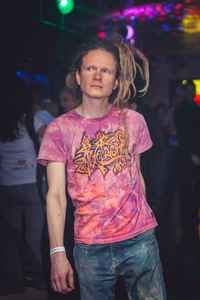 Real Name:
Kim Åke
Profile:
Aavepyörä emerged from the live action roleplaying circles of Helsinki sometime in the late 1990s. In the beginning there were a lot of members, some of who actually didn't even make music. All of the music up to around 2008 was made in various tracker software. All of the albums up to Ötökkömanifesti are the work of Samu, Jani, Heikki & Kim, who were the main active members.

They had very varying musical tastes and styles, and thus the old releases are very eclectic, but they wanted to keep it that way. Since two of the members (Samu & Kim) also wrote goa trance music, a side project called Summamutikka was created. Around 2002 the other members became inactive, and AVP practically became a solo project of Kim Åke. Summamutikka was also abandoned at that time, and various derivations of (psychedelic) trance became the main style of Aavepyörä. As the 2000s went on, Aavepyörä became strongly indentified with the so-called Finnish trance scene, altough their original intention was always to keep a clear distance to that for various reasons.

The original members believed a lot in free information, and most of them had at least a strong fascination with squatting, anarchism and similar ideas of freedom and solidarity. They were also influenced by the demo scene tracker music culture with open architecture songs available to everyone (that to this day has not happened in any other scene). They made CDrs, selling them for no profit, and around 2001 created a website giving all the music away for free. This was actually quite exceptional at the time, since especially the more "serious" musicians were quite jealous about their music, hoping to score a publishing deal. Soon after other more famous free music sites opened in Finland, and eventually elsewhere in the world too. Their music has also always been released under a Creative Commons license, and they have always been free of all collecting societies and similar agencies.

And since this always comes up, a quote from Kim Åke: "I have never used any drugs or even been drunk for that matter. This is actually a big issue for me, and the main problem I've always had with the psytrance scene, up to the point that these days I feel pretty bad about even performing in parties sometimes when I see people damaging themselves and the drugs in general creating a pretty unhealthy atmosphere. Each to their own, but I just wanted to make my stance clear, since I hear alwasy these crazy rumors and know there are big misconceptions about this."
Sites:
aavepyora.wordpress.com, SoundCloud, Bandcamp
Members:
Heikki Hyppänen, Jani Anttila, Kim Åke, Samuel Balk
Variations:
Viewing All | Aavepyörä
AVP, Aavepyörä All-Stars

March 7, 2011
Kim Åke is of that rare type: He has a totally unique vision on music, a sound no one could copy. The bedrock of his productions is psy/goatrance, yet either of these tags alone would do him unjustice; the sound field is unconventional in comparison to traditional psytrance, implicit influences are drawn from synth-pop, electro and videogame music. He even remixed two folk bands on his albums, Gjallarhorn and Falsobordone, especially the latter with beautiful female singing is to be heard, regardless which genre you'd normally lean on.
To give you a mental image, a felicitous reference comes straight from the name of the newest album, 'Kotiin Haltiakansan Luo', which roughly translated would mean '(Back) Home Among the Fairy People'. Aavepyörä's music is indeed a grand display of fairytale qualities, where child-like innocence, mysticism and light-hearted humour mix into one.
I couldn't recommend his music enough. He belongs in the same category as Koxbox, Hallucinogen or Pleiadians. Of course not in terms of style. But do any of these artists have a similar sound? That's right. The combining factor for these artists is all created music that wasn't there before them, they created something new. And another thing: His music is available for free on his website! You got nothing to lose here, check him out.
Reply Notify me 6 Helpful