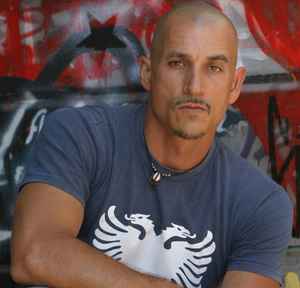 Real Name:
Ithaka Darin Pappas
Profile:
Lyricist & vocalist of "So Get Up" and "Escape from The City Of Angels". Born in California, lived in Portugal for a number of years, where he recorded the vocal-poem acapella, "So Get Up" and two hip-hop albums. He later returned to the U.S. and recorded Somewhere South Of Somalia (2001) with LA producer, Conley Abrams III. Then moved to Brazil where he recorded three records, one reportedly at a jungle studio in AkahtiLândia.

September 28, 2020
GENIUS with a soul. Every release and collaboration by/with Ithaka is luminous.

July 14, 2020
A talented story teller with a chilled-out vocal delivery who communicates equally (and supremely) well on hip hop, trip hop, electro, even indie rock. Lyricist/vocalist of all versions of "So Get Up" and it's derivatives (probably the most remixed acapella vocal in the entire electronic music world).

April 4, 2017
Fascinating individual, has achieved critical success in several different genres. I first heard Ithaka's hip hop music in the film Replacement Killers...but there is so SO much more, from the early records made in Portugal, to his later work in LA and Brazil. And ironically, he has never even really been credited with his acapella poem masterpiece, So Get Up...that the top dance world DJ nerds have been using in remixes like nonstop for years and years, werd !

August 15, 2008
This artist is nothing short of amazing. He has lived all around the world; in the United States, Greece, Japan, Portugal and Brazil...(at least). And is also a respected photographer, writer and sculptor. He has has amazing music in a variety of styles. His powerful poems, "So Get Up" and "You", have been remixed by top club DJs such as Fat Boy Slim, Dj Vibe, Junior Vasquez and Danny Tenaglia and are among the most defining songs in the dance genre. His main focus of neo-soul style, conscious hip hip is extremely unique and very story-oriented, he is definitely covering new ground lyrically. His song, "Escape From The City Of Angels", from The Replacement Killers soundtrack is all-time, a true hip hop classic. And I firmly believe that his more recent tracks such as, "The Life You Wanna Live ?", produced by the Brazilian Tito Gomes (for Ithaka's 2007 release Saltwater Nomad) will eventually find their way into the hip hop hall of fame.
See 1 reply