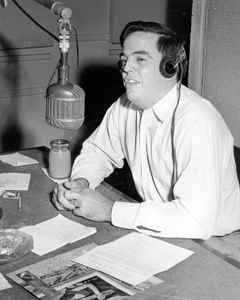 Profile:
American folklorist and musicologist, born 31 January 1915, Austin, Texas, USA and died 19 July 2002, Safety Harbor, Florida, USA. Son of John A. Lomax. Collected and edited the contents of the World Library Of Folk And Primitive Music, Southern Journey, and The Folk Songs Of Britain. An American ethnomusicologist, best known for his numerous field recordings of folk music of the 20th century. He was also a musician himself, as well as a folklorist, archivist, writer, scholar, political activist, oral historian, and film-maker. Lomax produced recordings, concerts, and radio shows in the US and in England, which played an important role in preserving folk music traditions in both countries, and helped start both the American and British folk revivals of the 1940s, 1950s and early 1960s.

For the writer credits please be careful to choose the correct one. Possibly his father is the correct one.
Sites:
culturalequity.org, Wikipedia
In Groups:
John And Alan Lomax, The Ramblers (2), The Union Boys
Variations:
Viewing All | Alan Lomax
A Lomax, A., A. L., A. Lomax, A. Lomaz, A.Lomax, Alan, Alan Lomax & Cast, Allan Lomax, Allen Lomax, I. Lomax, Loma, Lomas, Lomax, Lomax A., Lomax/Lomax, allan lomax, アラン・ロマックス