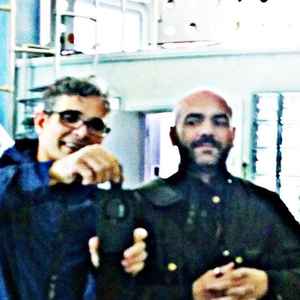 Profile:
Production team from Edinburgh, Scotland. Originally a post-punk group called Fini Tribe fronted by vocalist Chris Connelly, they acquired a sampler and moved in an experimental post-industrial direction. The Let The Tribe Grow EP featured the track 'De Testimony', which became an anthem for the original Balearic scene.
Three members left after a tour in 1988, including Connelly who moved to the States and joined Revolting Cocks and Ministry.

The slimmed down group amended their name to Finitribe and gradually moved to more of a techno/electro sound. After 1995's 'Sheigra' John Vinsky also left, Miller & Pinsky released one more Album before the group faded out after one last EP issued in 2001.

September 9, 2022
Oh how I wished Finitribe got the recognition they deserved. Such groovy and fun tunes using cartoon samples and killer beats and melodies. They were so creative and ahead of their time. Brilliant.

January 13, 2021
One of the most underrated electronic acts out there.
An Unexpected Groovy Treat and Sheigra are up there with the best dance/electronic albums of the nineties, like Dubnobass, Leftism etc... shoulda been massive

November 6, 2018
Maybe I'm asking for an obvious answer here but does
fini in British
mean the
adjective
finished; over