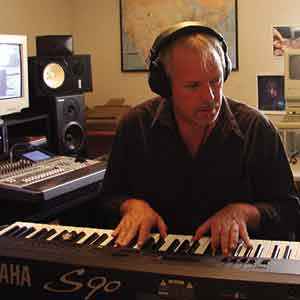 Profile:
Bill Wolfer was a hot young session musician who received an unexpected chance in 1982 to make his own record -- and made the most of it. The Wyoming native's star had been rising in the Soul Music world, and in the prior year he was involved with Stevie Wonder's Hotter Than July and had been responsible for the synthesizer and keyboard work on perhaps the year's most memorable song: Michael Jackson's "Billie Jean."

Based on some demos on a cassette tape, Solar Records honcho Dick Griffey signed Wolfer to a record contract on his new Constellation Records label, and Wolfer put together a truly great album in the vein of Quincy Jones' The Dude. The album, Wolf, seemed an unlikely hit. The disc included 10 Wolfer compositions, 5 with vocals and 5 without, and skirted the line between pop, soul, funk and the as-yet-undefined smooth jazz. Most surprising was the lineup of musicians on the disc. Stevie Wonder provided a harmonica solo on "Soaring;" Michael Jackson provided backing vocals on two cuts; Finis Henderson sang the original version of his great "Call Me;" and the world received its introduction to future Gospel star Jon Gibson on "So Shy," "Wake Up" and "Why Do You Do Me." The album's centerpiece was a moog-laden version of the Temptations' "Papa Was a Rolling Stone," which made it halfway up the Pop and R&B charts. While Wolf was only a modest hit, it remained a sought-after album for 20 years until its release (renamed Call Me: The Best of Bill Wolfer) in late 2002.

Wolfer went on to produce and perform with a number of acts, including Shalamar (he produced "Dancing In The Sheets"), Vanity and Dynasty. He also worked again with Gibson on the latter's debut album and on his CCM charttopper, Body and Soul. Wolfer later moved to New Age label Nouveau and recorded three successful instrumental albums.

Wolfer then disappeared from sight for several years before reemerging in 2000 as a leading purveyor of traditional Cuban jazz through his new group, Mamborama. Their 3 releases, especially Night of the Living Mambo, were critically acclaimed and provided a great introduction to that genre. In early 2008, Mamborama's Directamente Al Mambo was nominated for a Cubadisco, the Cuban equivalent of a Grammy.