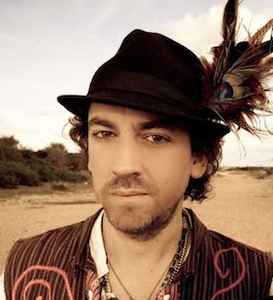 Real Name:
Simon James Posford
Profile:
Hallucinogen is the stage name of Simon Posford (born 28 October 1971) an English electronic musician, specializing in Psychedelic trance music. His first studio album, Twisted, released in 1995, is considered one of the most influential albums in the genre. In particular, the first track, "LSD", which remains the defining sound of Goa trance to this day.

Although an album called "Asnesnothine" is frequently encountered on the Internet, it is only a bootleg.

I think Hallucinogen's albums (excluding "In Dub") are neither Goa trance nor Psytrance. "LSD" and "Alpha Centauri" are the only tracks he has produced which can be categorized into Goa Trance specifically, and since then, up to somewhere around '98 or '99 (when he started producing some alternative form of psytrance in collabs such as "Beast"), his style was floating between psy and goa but touching neither. His style was layers upon of layers of sounds but not exactly the AP's "layeristic" goa. Everything is really twisted full of panning, bouncy, rubbery, squelchy synth lines with loads of sound effects.

In my humble opinion, saying Hallucinogen was a great goa/psy producer is a false statement. Yes, he is one of the greatest underground musicians of all time over all of his projects, but on his Hallucinogen-related acts the style is so different and unique (which can also be said for his seriously underrated post-90's work, but to a lesser exent) that the broadest term I would use to describe it is "twisted psychedelic trance with a goa spirit full of sonic wizardry" ;)

November 29, 2013
Hallucinogen has that really rare thing about being a incredible good project while having a great commercial appeal too, every psytrance producer duty is to listen this before even attempting to make music.

For a weird reason he stoped with hallucinogen to make "world music" and i and many more think is time to go back to hallucinogen again!
Reply  See 1 reply Notify me 9 Helpful

The brightly shining star of the musical genre 'Goa" that shot rapidly to the top in the mid-90's and has remained there ever since. Goa afficianado's will attest that all his music has a strangely mystical and magikal "posford" touch, which is apparent even in his other aliases and collaborations. His use of synthesizzlers and effects has (in the last 15 years) been matched by but a few.

Though the name "Hallucinogen" is still synonymous with goa-trance (circa 2010), not much output has been seen in the past few years apart from a few single's released on compilations . A third album is long overdue and hopes for it are alive in the hearts of many.

In short, for those unfamiliar with goatrance, listen to either of Hallucinogen's albums for a mind-melting taste of what goatrance is about. For goalovers, you already know what I mean so let us all please goahead and take a bow for the guv'nor of Goatrance !!

Hallucinogen is one of the rare diamonds in the rough, where nearly every track is a 10 / 5, or way beyond any rating.

December 30, 2009
Probably one of the finest Producers of electronic music. Years before his time and instrumental in pioneering Goa/psytrance music.
Reply Notify me 4 Helpful