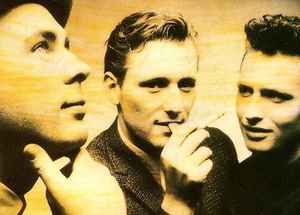 Profile:
The brothers Gary and Kit Clark formed a pop group in Dundee, Scotland with their long-time friend Ged Grimes in 1984, first known as Spencer Tracy. But when the estate of the American actor Spencer Tracy contacted the band, they changed their name to Danny Wilson, taking the name from a Frank Sinatra movie Meet Danny Wilson (1952).

Initially the trio played on the streets around Dundee, they were signed to Virgin Records in 1986. They released two albums, with only one song ("Mary's Prayer") becoming a radio hit in the United States in 1986, then in the U.K. in 1988. The band broke up in 1991, with Virgin Records releasing a best-of type compilation, Sweet Danny Wilson, in 1992.
Sites:
MySpace, Wikipedia
Members:
Gary Clark, Ged Grimes, Kit Clark
Variations:
Viewing All | Danny Wilson (2)
Danny