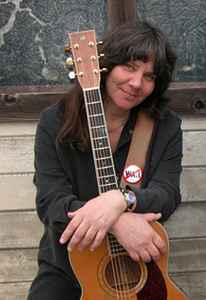 Profile:
American guitarist. Her accompaniment of Kate Wolf first earned her recognition, skills as performer, producer and arranger have continued to deepen. Has an ability with an eclectic range of styles. folk, country, bluegrass, rock, or blues. Nina has performed and/or recorded with: Karla Bonoff, Peter Rowan, Nanci Griffith, Greg Brown, Lucy Kaplansky, Mollie O'Brien, Dave Alvin, Rosalie Sorrels, Laurie Lewis, Terry Garthwaite, and many others. After seeing Kate Wolfe perform in 1975 at a pizza parlor in Sebastopol, California - Nina's home town - Nina dared to set working with Kate as a specific goal, and by 1978, the goal was accomplished. Nina came to be an essential part of Kate's music, as she grew into being her accompanist and close musical companion. It was a partnership which lasted until Kate's passing in 1986. Whether it's on her own "solo" CDs - collaborations with many of the folk world's finest - or producing, arranging, or performing with countless others, Nina continues to prove with her guitar that some of the truest and most emotional communication.
Sites:
ninagerber.com
In Groups:
Dave Alvin And The Guilty Women, Solid Air