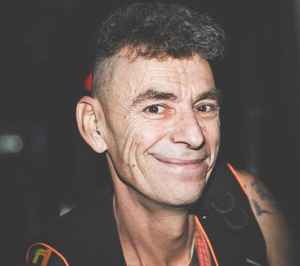 Real Name:
Oliver John Wisdom
Profile:
Space Tribe, aka Olli Wisdom (born 8 March 1958, London, England – died 23 August 2021, London, England) was an English Goa and psytrance musician, and clothing producer. Olli was a pioneer of Psychedelic trance for many years and Space Tribe was one of the best known names in the psychedelic scene.

In the early 1980s, Olli was the singer in the theatrical Goth/Glam band Specimen, and founded the famous London goth club "The Batcave". After the band split up in 1986, Olli went traveling in Asia and in 1988 and arrived in Koh Phangan, Thailand where he first encountered the electro-driven psychedelic parties on the beach. He stayed there for 2 years, DJ-ing, and set up a small studio and made tracks for parties, before moving to Goa, India. Over the next 4 years, Olli spent his time mostly in Goa, but also travelled around the world making parties in other places, including: San Francisco, Switzerland, UK, Japan.

In 1993, Olli and his brother Miki Wisdom, and fellow space cadet, Richmond, started Space Tribe clothing in Bali. The fractal fluoro party gear was an instant success and can be see at parties all over the planet.

In 1995, the first Space Tribe tracks were hatched in the Butterfly studios with Simon Posford (Hallucinogen/Shpongle). Olli moved to Byron Bay, Australia, and set up the Rainforest Space Base studio. Space Tribe released the first album, 'Sonic Mandala' on Spirit Zone in 1996, and since then Space Tribe has released at least an album a year. In 2004 Space Tribe Music was set up as a record label providing an outlet for Space Tribe releases and compilation albums. Space Tribe have also made many tracks in collaboration with other artists: GMS (Alien Jesus), X-Dream, Menog,Samy Guediche (CPU), Luke Psywalker, Electric Universe (ESP (8), Tristan, Dickster (Green Nuns Of The Revolution) and Mad Maxx (3).

August 26, 2021
Such an amazing artist and visionary. He will be missed, but the legacy will live on.
Reply Notify me 1 Helpful

August 24, 2021
He will truly live on through his music, he left behind something beautiful. RIP
Reply Notify me 2 Helpful

August 23, 2021
Rest in peace Oli, you were a true legend and staple of our scene and we will never forget what you have done for us. Thank you