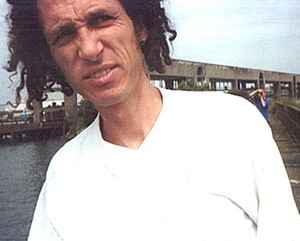 Profile:
Radboud Mens is a sound-artist, composer and sound designer. He started creating noise-machines in 1988. In the early 90s he attached contact mics to dog’s brushes that he used to destroy vinyl records by scratch-playing them, boosting the signal through broken cassette-decks and recording the results. He also made rhythmic-noise using a broken turntable. In 1994 these experiments were released as a two CD set by the British label i under the project names Hyware and Technoise. To achieve the full effect, listeners had to shuffle-mix the two discs together themselves.
In 1995 he released as L.O.S.D., together with Peter Fleur, the drone CD L.O.S.D. - Organic 23 that came with a 5 inch vinyl locked groove record to play along with the long drone pieces on the CD.
From 1997 on he also released music under his own name, music that is more minimal and conceptual. For his CD Radboud Mens - Cl;ck, which was made in 1997/1998, but released two years later, he used digital clicks and errors he collected while cleaning up digital recordings during his stint as a sound engineer at the Centre Of Electronic Music in Amsterdam. Radboud Mens - Pulse, his next CD release, is based on a DSP function called ‘convolution’. He worked on the vocabulary for this CD for two years.

Radboud Mens has worked with a broad variety of sound artists and composers, including Stephan Mathieu, Janek Schaefer and Timeblind, voice-artist Jaap Blonk, guitarist Dan Armstrong (as Fitness Landscape), Michel Banabila, Mark Poysden (as Alignment), Craig Ward (ex-dEUS), and MVK. His music has been released by Staalplaat, Mutek_Rec, Audio.nl, ERS, Bake Records, Noise Museum, Takashi Mobile, Tapu Records and Ash International; both Audio.nl and Vynalogica released some of his minimal-techno as a series of 12” LPs. In live situations he collaborates with video artists such as Marco Douma, Remco Schuurbiers, Bas Van Koolwijk and Jpech. He co-founded the ERS label with Dan Armstrong in 1999, which is dedicated to experimental ambient-noise and drone music; after a break of 10 years, ERS is now active again.
He presented a radio show called Earbitten for the Amsterdam free radio station Radio 100 for sixteen years between 1986 and 2003. He still has a radio show called 230 Volt on the Concertzender in the Netherlands and alternates as the producer of the Staalplaat radio shows on dfm.nu
Sites:
radboudmens.com, Bandcamp, Facebook, SoundCloud
Aliases:
Hyware, Technoise
In Groups:
Alignment, Bootlx, Cloud Ensemble, Elena Rauschenbach, L.O.S.D., LØSD, Mensimonis, Ohm (26), Staalplaat Sound System, Template (2)
Variations:
Viewing All | Radboud Mens
Mens, R. Mens, Rat